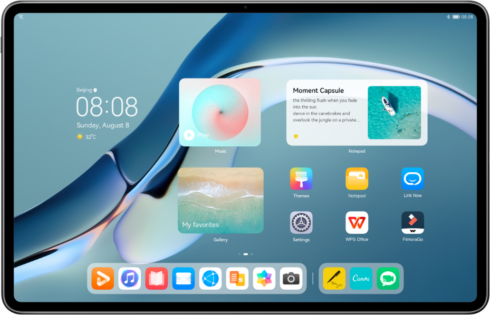 When the United States moved to sanction Huawei and deny it access to American technology, it forced Huawei to pivot away from Google and Android and embrace a next-generation operating system it had been working on quietly for years.  The disadvantage to a new OS is that it has no initial developer support; the advantage is that since there is no developer support, the company doesn’t have to worry about backward compatibility and can therefore push the envelope with the technology.

Huawei Harmony, now in its second generation,  is a microkernel OS designed to span a variety of devices.  While it started on TVs, Huawei wasn’t anticipating being booted off of U.S. technology. The plan then shifted to expand it to many more smart home devices, including laptops and wearables.  As of this writing, the OS hasn’t yet appeared on a PC.  The model appears to be similar to Apple’s, where Huawei controls the user experience with far more flexibility and lower charges than Apple requires.

Let’s talk about why you might want to consider Huawei’s Harmony OS as the next platform for your applications.

One OS for everything

One of the significant failed efforts by Microsoft was Windows 8. It was supposed to span PCs and smartphones but failed because Microsoft had to assure backward compatibility, which created issues with its smartphone offerings, rendering it uncompetitive.  In addition, the common user interface was panned by PC users, causing both the PC OS and the smartphone effort to fail.  The concept of one OS covering all devices is compelling but was not on the table when Windows was created, so retrofitting that capability over a decade later didn’t work.

Apple couldn’t do this either and still has different operating systems on its PCs, smartphones, and tablets. Apple’s questionable path to lower the related costs appears to eliminate the PCs over time and replace them with iOS-running iPads. That path hasn’t been a resounding success either.  Both DOS and the macOS came to be because IBM’s platforms at the time couldn’t scale down to PCs.  We have a similar problem now but with much smaller devices. Still, the concept of one OS across various personal and IoT devices like digital assistants remains compelling. Huawei has stepped up to this opportunity with its Harmony OS.

While Steve Jobs tried to get Dell to license the macOS, Michael Dell refused because he couldn’t justify a dual boot PC’s added cost.  Huawei isn’t asking anyone to dual boot anything, nor do I think that approach would be more viable for them than it was for Dell and Apple. Still, the threat of a technology ban has Chinese hardware manufacturers banding together, and both Xiaomi and Oppo have joined this effort as a hedge against the U.S., banning them as well.  Current projections have Huawei’s Harmony OS on up to 300M devices by the end of 2021. This goal is undoubtedly aggressive, but with the backing of the Chinese government, it’s certainly possible in the regions where Huawei continues to sell.

So, the potential here is for Harmony OS to become a blend of Apple focus and Microsoft licensing for the next wave of vendors, primarily out of China, who need an alternative to Microsoft and Google and are attracted to this open-source alternative.

The U.S. ban on Huawei has forced the company to pivot rapidly and take a microkernel OS it was developing for TVs and expand its capabilities massively.  Huawei uses a blend of the Microsoft and Apple legacy concepts and current technology to create a next-generation platform already successful in Asia and Europe and promises a far better developer experience than Apple has, but with a similar focus on quality and user experience. Huawei’s new second-generation Harmony OS is a blend of new technology and trusted concepts that promise a far better developer experience than Apple can or will provide.

Huawei is moving fast on hardware. Its new Metapad Pro already rivals the iPad Pro (in Asia), and its Huawei Watch 3 is the closest in capability to an Apple Watch I’ve seen so far.  Both products’ problem isn’t the technology or platform. It is the lack of apps.  This shortage means that if you are having a problem getting noticed on the Apple platform due to the sheer number of apps, you shouldn’t, at least for now, have a problem with Harmony.  With Apple seemingly at war with their developers, maybe it is time to consider a vendor who still believes it needs developers and, instead of being lost in Apple’s app ocean, can gain visibility in Huawei’s growing, but still small, developer pond.