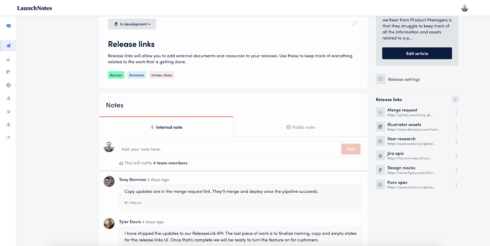 After three months in private beta, LaunchNotes is now generally available. LaunchNotes is a new platform designed to keep development teams on top of product changes, communicate with users about changes coming, and provide updates to stakeholders.

According to the company, Agile and DevOps practices are making it hard to communicate the right information to the right people at the right time. “With Agile reaching peak adoption, an explosion of CI and CD tools enabling teams to build and ship code faster than ever before, and DevOps fueling an enormous wave of automation, teams from Product Marketing to Customer Support to Sales are falling further behind. The end result is more code being delivered faster, but at the cost of an increasingly substandard customer experience,” the company wrote in a blog post.

LaunchNotes was launched to solve the issue of managing change and enable more communication about those changes. Some features include a public release stream, an internal change feed, and release articles. Additionally, development teams can provide status updates and measure impact about feature adoption and engagement within LaunchNotes.

“While many project trackers do a great job of keeping track of the current status of work, this information is only available to the people, or teams, who regularly access that project tracker. LaunchNotes is the communication layer that sits on top of your project tracking system and sends specific and consolidated updates about work being done to stakeholders across the business. With the click of a button, stakeholders can subscribe to any workstream or category of work relevant to them,” LaunchNotes wrote.

The company was founded by three former Atlassian employees after hearing that many businesses are struggling to stay in sync with the development teams.

“We created LaunchNotes to enable entire organizations to move at this same speed and work synchronously with their dev teams, no matter how fast software is reaching customers,” the company wrote.