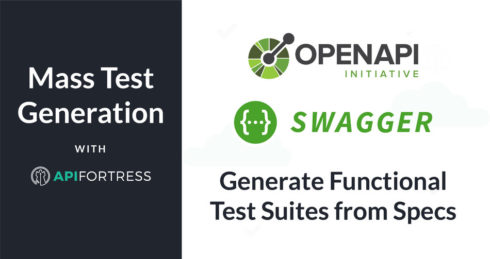 API Fortress has announced the new Mass Functional Test Generation solution. The new tool is a beta release that is expected to be made available later this month. It tackles API testing and monitoring, and provides the ability to generate large batches of test.

“With over 95% of API vulnerabilities caused by human error or functional error, it’s very important to functional test all APIs prior to release, and then monitor them with the same functional tests. As more companies accelerate releases and incorporate automated CI/CD pipelines, detecting and fixing functional errors before they are released is more important than ever,” said Patrick Poulin, CEO and co-founder of API Fortress.

Other features of the new release include the ability to import OpenAPI or Swagger spec files and generate a large number of functional tests.

“This investment accelerates Snyk’s significant momentum in transforming the way application security is approached and delivered in software-driven enterprise organizations,” said Peter McKay, Snyk CEO. “With rapid 2019 revenue and customer growth from both individual users and scaling development teams, we are seeing the market embrace developer-first application security to help tackle the increasing cybersecurity concerns that come with digital transformation.”

The latest investment was led by Stripes and included other investors such as Accel, Coatue, Tiger Global, Boldstart, GV, Canaan, Trend Forward, Amity and Salesforce Ventures.

TestProject and Sauce Labs team up on codeless test automation
The new end-to-end automated testing experience will cover test creation, execution and analysis. According to the companies, the solution will leverage TestProject’s codeless test creation services and Sauce Labs’ continuous test execution services. Together, the companies will be able to create, store, execute, and analyze automated tests across a wide range of browsers, operating systems and devices.

“Shifting workloads to the cloud is consistently ranked as one of the most important initiatives on a CIO’s agenda, and testing is an increasingly important focus,” said Kevin Dunne, general manager of TestProject. “The combination of TestProject and Sauce Labs is a powerful one for organizations looking to ease the onramp to automation through codeless test creation and develop a continuous testing strategy consistent with CI/CD best practices.”

HCL Technologies to focus on Microsoft technologies
The company announced a dedicated HCL Microsoft Business Unit that will extend Microsoft’s offerings and help employees do more in the modern workplace. In addition, the business unit will provide support for clients in financial services, healthcare and life sciences, manufacturing, retail and travel industries.

“The HCL Microsoft Business Unit is the next phase to bolster HCL’s successful and long-standing relationship with Microsoft. Increasingly, customers are making bold strides, incorporating IoT solutions with machine learning for analytics, running this solution in the public cloud and supported by CRM,” said Kalyan Kumar, corporate vice president and CTO for IT Services of HCL Technologies. “This business unit combines HCL’s specialized services and global reach with Microsoft’s powerful cloud and business technologies, making a strong and unique offering for clients. These offerings are coming at a critical time when enterprises are aggressively implementing digital technologies for competitive advantage. Spearheading the HCL Microsoft Business Unit is Don Jones, who brings 20+ years of Microsoft experience, having created numerous successful solutions and go-to-market campaigns with Microsoft, and we’re confident in his ability to successfully lead this initiative.”