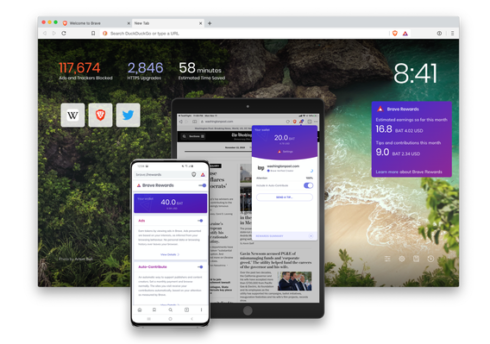 Brave launched its new browser designed to offer users a fast browsing experience, while funding the Web through a new attention-based platform of privacy-preserving advertisements and rewards.

Brave’s private ads and payment platform (Brave Rewards) is now available for iPhones and iPads in addition to desktops and Android devices.

“Either we all accept the $330 billion ad-tech industry treating us as their products, exploiting our data, piling on more data breaches and privacy scandals, and starving publishers of revenue; or we reject the surveillance economy and replace it with something better that works for everyone. That’s the inspiration behind Brave,” the company wrote in a post.

“Testim’s open approach to testing lets developers and QA engineers write tests their way, in their tools and processes, so they can collaborate freely. Unlike other codeless test automation tools, developers can download their tests as code, eliminating vendor lock-in,” the company wrote in a post.

The AI inspects the elements of the application and continuously learns from and improves the robustness of tests.

“By giving developers the tools they need to both build and run secure containers, including monitoring Kubernetes workloads for vulnerabilities, Snyk Container is helping customers to drastically reduce the risk of growing container infrastructures and scale security best practices,” said Guy Podjarny, the co-founder and president of Snyk.

The full details on Snyk Container are available here.

Isolator++ uses patented isolation technology in order to change the behavior of methods under test and has the ability to handle C and C++ development paradigm, features and common practices.

“We are not happy with the state of c/c++   unit testing so we decided to offer our unit testing solution for free in order to push developers become more agile and develop healthier and better code. Now developers have no excuse not to unit test” said Eli Lopian, Typemock founder and CEO.  “Our Isolator ++ solution is like Gmock but on steroids and will allow any c/c++ developer to benefit from a powerful single mocking framework while finding and rapidly fixing bugs easily.”