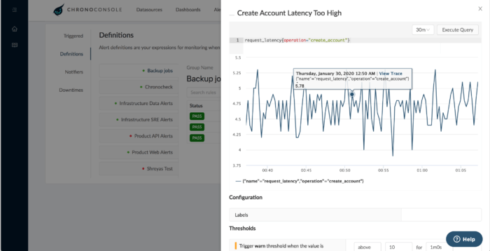 Chronosphere’s cloud-native monitoring product reached general availability this week. The product is powered by the open-source metrics engine M3 that the Chronosphere founders worked on while they were at Uber.

According to the company, the solution enables customers to retrieve monitoring data produced by cloud-native environments and helps customers control their spending while their data grows.

Chronosphere also raised $43.4 Million in its Series B growth funding round that was led by the previous investors Greylock, Lux Capital and venture capitalist Lee Fixel, and as of this round, General Atlantic joined as well.

GitHub now available in Iran
GitHub announced that it received a license from the U.S. to offer GitHub in Iran, despite the current sanctions in place.

This nullifies the access restrictions that GitHub activated in 2019 for developers in Iran, which now has access to all individuals and organizations.

“Over the course of two years, we were able to demonstrate how developer use of GitHub advances human progress, international communication, and the enduring US foreign policy of promoting free speech and the free flow of information,” Nat Friedman, the CEO of GitHub, wrote in a blog post. “We are grateful to OFAC for the engagement which has led to this great result for developers.

JupyterLab 3.0 released
JupyterLab 3.0 introduces many new changes such as having the visual debugger shipped by default, the table of contents extension, support for multiple display languages, and more.

The UI also got an improved Simple Interface mode that has a more document-oriented feel and there is a switch to toggle it in the status bar. JupyterLab automatically switches to this mode when the window is sized down.

Installing and using extensions has also been simplified through pre-built extensions that don’t require users to rebuild JupyterLab or have Node.js installed.

Additional details on all of the changes in version 3.0 are available here.

Wasmer 1.0 released
Wasmer 1.0 is now generally available. It is a WebAssembly (Wasm) runtime that is able to run Nginx server-side and is being used in software containerization.

“Wasm automatically sandboxes applications by default for secure execution, shielding the host environment from malicious code, bugs and vulnerabilities in the software it runs,” Syrus Akbary wrote in a blog post. “Wasm also provides a lean execution environment enabling Wasmer containers to run in places where Docker containers are too heavy to work.”

Wasmer 1.0 includes new features such as production-ready performance, pluggable infrastructure, a native object engine, a headless Wasmer that is ideal for IoT, and much more.