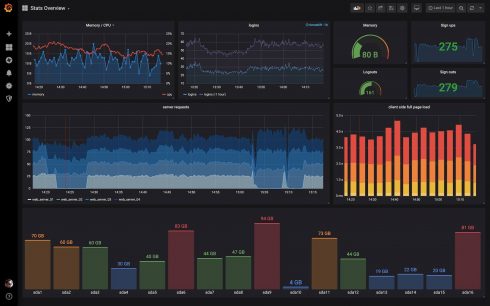 Grafana Labs also introduced a new data source: Alertmanager, which is in alpha and includes built-in support for Prometheus Alertmanager.

Also, data sources can now send real-time updates to dashboards over a websocket connection, which can be used with the MQTT data source.

Full details about the release are available here.

Sentry updated its enterprise offering with the addition of customizable dashboards and updates to its Jira and Azure DevOps integrations.

Teams can build the dashboards to showcase important data and metrics such as errors by count, slow transactions by geography, the impact of releases and then share the results throughout the organization.

The updated integrations automate the flow of issue triage and ticket creation so that times can see the most critical issues automatically.

Synopsys announced that it acquired Code Dx to automate the discovery, prioritization and remediation of software vulnerabilities.

Synopsys provides customers a portfolio of application security solutions that include static, dynamic, and interactive application security testing and software composition analysis. The company’s Intelligent Orchestration solution automatically determines the most appropriate type of test for each scenario.

Docker announced that it is taking down the free tier of its Autobuild service as of June 18th due to some people using the service for crypto mining.

Developers who are part of the Docker Open Source program will continue to be supported as part of the Free plan. Docker is also offering 20% off of the Docker Pro and Team price for for new and returning subscriptions through June 18th.

“While making these changes is never an easy choice, we’ve also continued to focus on making meaningful improvements to the performance of Autobuilds,” Shaun Mulligan, the principal product manager at Docker wrote in a post. “All of these improvements should see a faster and more stable build experience with lower queue times.”

The engineering insights tool provider Haystack Analytics announced that it secured $1.2 million in a funding round.

The company aims to use the funding to provide solutions that help teams prevent burnout, experiment faster and ship reliably.

“Until now, it was difficult for CTOs and engineering managers to objectively know what their roadblocks are or have insights into resourcing levels. Haystack gives visibility by providing metrics and alerts to make sure nothing continues to be stuck. We are helping developers to ship faster and improve their satisfaction,” said Julian Colina, the CEO and founder of Haystack Analytics.