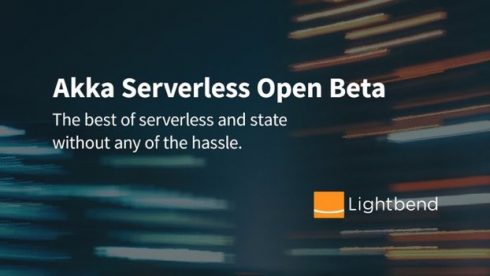 Lightbend has announced the launch of Akka Serverless, a cloud-native development platform-as-a-service that enables the creation of cloud-native apps using any programming language and eliminates the need for databases in deploying business-critical apps.

Akka has a simple, API-driven programming model that makes it easy for developers to define the data that they need so that it is available automatically at runtime, according to the company. Users don’t have to concern themselves with database administration, maintenance or APIs.

“Until now, the challenges of dealing with state at scale have meant that a serverless approach has not been able to address many more complex applications, such as IoT platforms, real-time financial services, modern eCommerce systems, streaming media, internet-based gaming, factory automation, telemedicine, and more,” said Jonas Bonér, Lightbend’s founder and CEO. “What is needed is a data-centric backend application architecture that can handle the volume of data required for today’s applications at extremely high performance.”

The new tool is integrated as part of the Contrast Application Security Platform so that users have a unified, developer-friendly view of vulnerabilities and attacks with harmonized security profiles across SAST, IAST, runtime protection and observability, and SCA within one DevSecOps platform.

“We are excited to announce that SpreadJS now supports pivot tables for your JavaScript spreadsheet applications,” said Kevin Ashley, the product manager at GrapeCity. “Similar to Microsoft Excel, this add-on feature allows you to quickly summarize and analyze large quantities of data with a simple and intuitive UI.”

IBM announced new code contributions to make it easier to develop and deploy blockchain solutions for businesses, including the underlying code for the IBM Blockchain Platform Console.

The Console allows for different platforms to easily integrate with a Hyperledger Fabric network to enhance standardization.

The adaptive computing solution provider Xilinx announced that it acquired Silexica, a privately-held provider of C/C++ programming and analysis tools.

The suite will be integrated into Xilinx Vitis unified software platform to reduce the learning curve for developers who want to build applications on Xilinx technology.