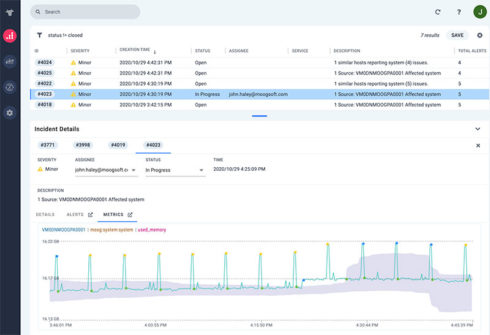 “Old-fashioned monitoring solutions, including many that claim to be new, lead to expensive investments that take months to deliver any results,” said Moogsoft founder and CEO Phil Tee. “Meanwhile, businesses continue to rely on SREs for manual event management, and on their customers to alert them of an outage. The Moogsoft Observability Cloud empowers DevOps and SRE teams with a platform that deploys in the time it takes to wait for their cappuccino, but leverages the most advanced AI to redefine observability.”

Additional details on the solution are available here.

Anaconda Dividend Program will donate to open-source projects
Through the program, Anaconda will donate to various projects and programs under the NumFOCUS umbrella with a particular focus on initiatives that are under-resourced or need increased diversity.

“Open source is in our DNA at Anaconda, and it occupies a critical place in today’s technology landscape, driving innovation at a pace proprietary software could never match. Virtually every industry benefits from open-source software, but there aren’t ready mechanisms for commercial users to cultivate investment in the community,” said Peter Wang, the CEO and co-founder of Anaconda.

Anaconda and NumFOCUS will release an annual report detailing amounts and sources of funding for the program, as well as the projects and initiatives that have been funded.

The integrations include Microsoft Teams, Google Calendar, and Zapier which extends the Fuze experience into daily workflows by giving users the ability to automate manual tasks and create custom integrations.

Snyk and Rapid7 team up on cloud-native app security
The companies teamed up to offer a comprehensive cloud-native application security platform that will uncover vulnerabilities both statically and dynamically.

The combined SCA, SAST, DAST, and RASP offering will allow joint customers to uncover their security flaws and to more effectively enable developers to prioritize the remediation and mitigation of high-risk vulnerabilities.

Apache weekly update
Last week at the Apache Software Foundation saw the release of Apache APISIX 2.0 – the dynamic, real-time, high-performance API gateway, based on the Nginx library and etcd.

Another release was Apache SkyWalking Nginx LUA 0.3.0, which added prefix to avoid conflicts with other LUA libs; Add `http.status` tag.