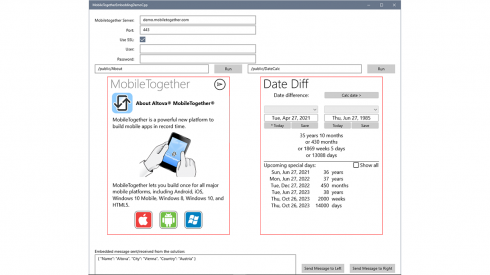 The latest release introduces options to enable in-app purchases in the native iOS, Android, and Windows apps they create using MobileTogether and the ability to embed the MobileTogether Windows client in one’s own UWP.

Sila raises $13 million in Series A round

The API platform provider Sila announced that it raised $13 million in a Series A funding round led by Revolution Ventures. Its total funding is now at $20 million.

Sila stated it will continue to bring entirely new financial technology innovations to market to bridge the gap between outdated banking systems and the emerging financial system being built on blockchain technology.

With Cloudflare’s new project, eligible local communities can use the company’s performance and security services–for free–to more reliably and securely connect to the global Internet without paying the high costs of bandwidth.

“Safe, reliable, and sustainable Internet access is a basic human right,” said Matthew Prince, the co-founder and CEO of Cloudflare. “Unfortunately many communities are building their own infrastructure only to be blocked by high bandwidth costs. We want to help where we can–if they’ve already built the connecting roads, we want to offer our network as the safe, accessible highway to the global Internet.”

Network organizers will be able to find a free on-ramp to the internet, operate secure and performant networks for everyone and utilize Cloudflare’s global network that spans over 100 countries and connects with over 9,500 networks globally.

Last week at the Apache Software Foundation saw the release of Apache Tika 2.0.0, which includes a significant refactoring from the 1.x branch including modularization of the parsers modules, the new pipes modules and numerous bug fixes and dependency upgrades.

A vulnerability and patch was found in Impala in which logs contained secrets.

Additional details on all of the new releases from the ASF are available here.