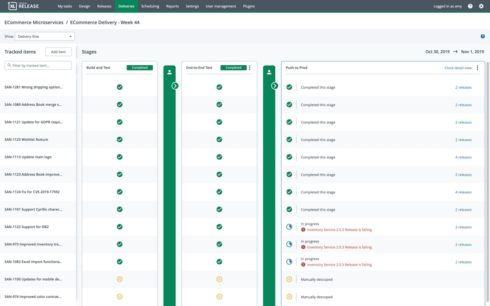 XebiaLabs announced the release of its DevOps Platform version 9.5. This release is designed to provide business-level insight into complete software releases.

The new release includes a Delivery Patterns feature, which synchronizes the delivery of business applications across technical release pipelines, according to the company. With Delivery Patterns, users can track business applications, synchronize component pipelines, model pipeline dependencies and visualize the real-time status of component pipeline execution.

The new features include KIP-392, which allows consumers to fetch from the closest replica, as well as features such as a consumer incremental Rebalance Protocol and the ability to create an administrative API for replica reassignment.

The full details on what’s new in Apache Kafka 2.4.0 is available here.

The new version provides key workflow integrations sush as code repositories, build and bug-tracking tools to insert security into the earliest stages of the SDLC.

“ShiftLeft Inspect is designed to give developers the speed, accuracy and seamless CI/CD pipeline integration they need. Yet, developers are the ultimate ‘try before you buy’ consumers so we’re now offering security to them through a truly usable, self-service and free version so they can see exactly what Inspect can do for them,” said Manish Gupta, CEO of ShiftLeft.

The full details on the new version are available here.

“Together with Linux Academy, we are ensuring that each customer has access to the highest quality and most relevant content throughout their continuous learning path,” said Sam Kroonenburg, the CEO of A Cloud Guru.

Kroonenburg explained that its customers will benefit from a more comprehensive course catalog with much greater depth in Linux, Security, DevOps, Big Data and Containers content across AWS, Azure and Google Cloud.

The full details on the acquisition are available here.