The festival itself was originally setup by computer collector Sellam Ismail, who shepherded the event for nine years while also running his own vintage computing consulting firm and electronics recycling operation. Ismail would recover old data from long dead media using his massive collection of computing hardware.

But Ismail hit tough times in 2008, like most Americans. He lost most of his collection when a greedy landlord in Stockton decided to play hardball over a late rent payment, and currently Ismail has given up on collecting due to the tremendous stress and strain this legal battle caused him.

The Vintage Computer Festival West also hosted talks from industry pioneers, and from extremely accomplished collectors, such as Bruce Damer from Digibarn. Damer’s collection includes many extremely rare items, such as the original business plan for the Macintosh from 1981. The plan is laid out like the Macintosh GUI, with drop down menus and windows. As the Macintosh didn’t exist yet, the plan was created by an Apple employee on a Xerox Alto which the artist used after by onto Xerox campus for a few weeks.

So then, we present some pictorial highlights from the Vintage Computer Festival West, at the Computer History Museum in Mountain View, Calif. this past weekend: 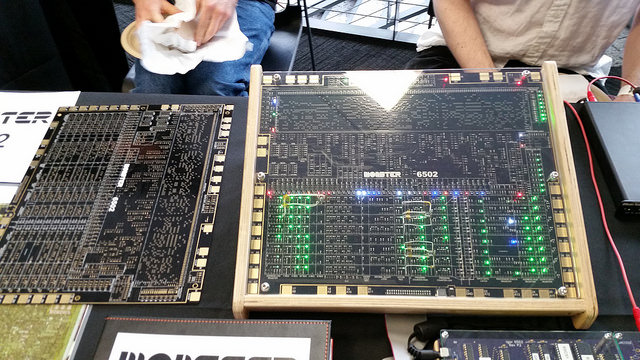 The MOnSter6502 is a complete 6502 process implemented in transistors, rather than on silicon. The device runs just like a normal 6502, but costs about 300 times as much to produce, since it’s a custom circuit board and mask. Eric Schlaepfer from Sunnyvale, Calif., created the processor in his spare time. Monster6502.com 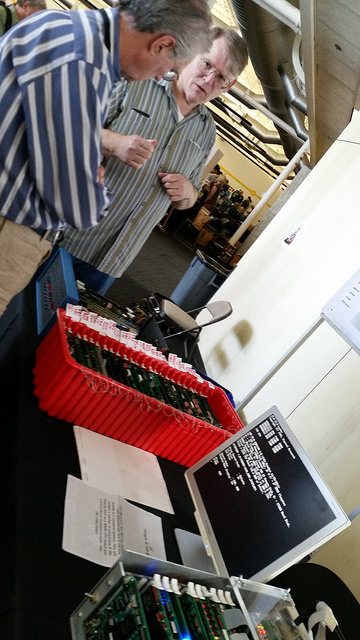 Before there were PCs, there was the S100 platform. Users would piece together RAM, CPU, bus and everything else that makes a computer, then slot the cards into a simple chassis. John Monahan showed off his new S100 boards, as well some some rather rare older boards for the machine, such as the 80486 board. 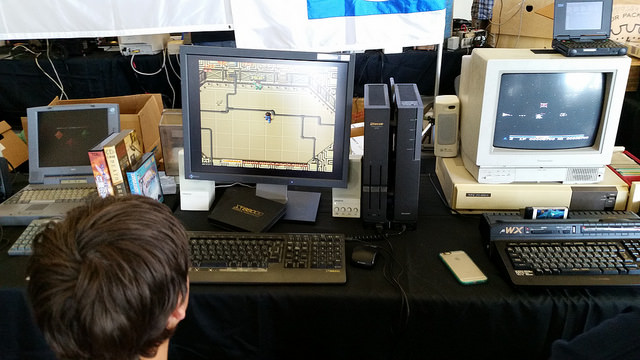 Duncan Mac Dougall and Mitch Zollinger brought their collection of rare Japanese computers the VCF West. These included the MSX, the PC98, and a PC 98000. Users were able to play some of the rare games that were only released for that platform, such as the real Metal Gear 2 and Akumajo Dracula. 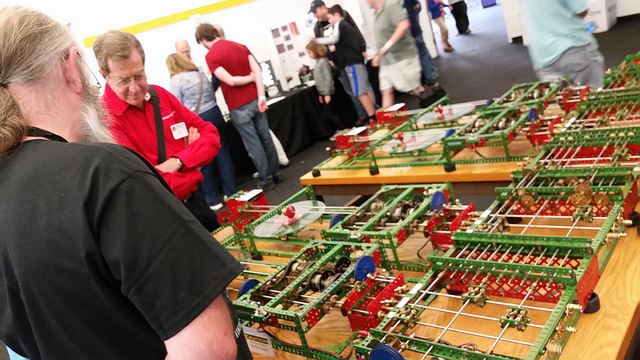 It wouldn’t be a Vintage Computer Festival on the West Coast unless Tim Robinson was there with one of his mechanical computation devices. This year, it was the differential analyzer cranking away, happily clicking out mathematical answers to complex problems. 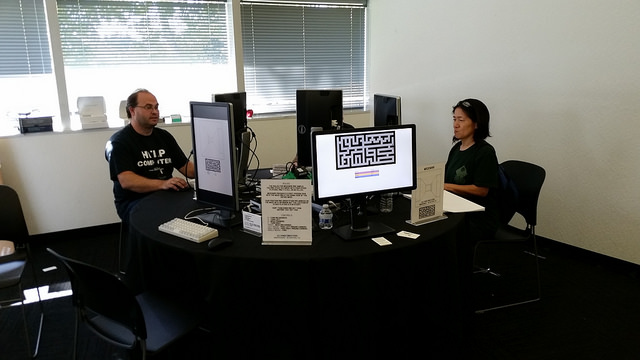 If you thought you were cool because you networked two computers together with a null modem cable in the early 90’s and played multiplayer Doom, you’ve got another thing coming. The original networked first person shooter is almost 20 years older than Doom. Mazewar was on display and in playable form via emulated Xerox Altos, thanks to the Living Computer Museum. http://www.livingcomputermuseum.org/ 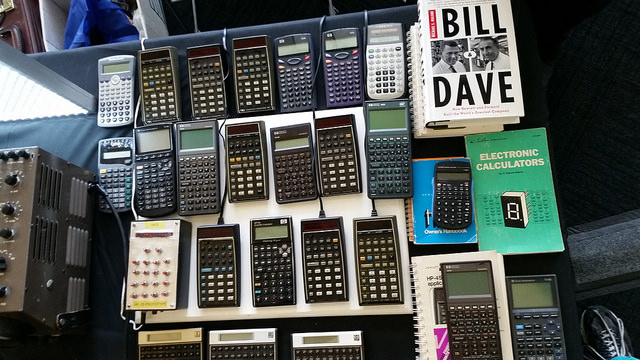 While not everyone gets excited about calculators, old computer collector’s sure do. This display from Don Apte featured a decade’s worth of HP calculators. Apte worked at HP in marketing, and the clear prize of his collection is the white and red HP 35 prototype in the bottom left corner of this image. The VCF West exhibit judges were completely blown away by this prototype and gave it a special award. 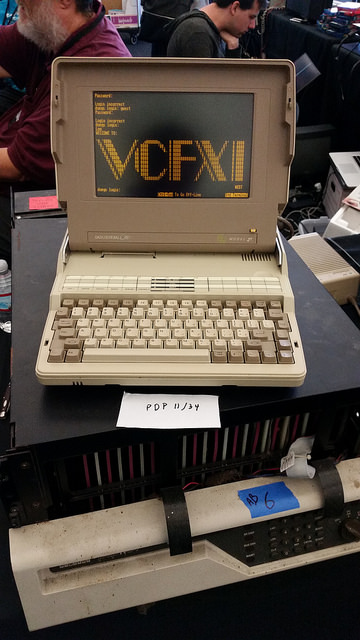 Sadly, this Data General DG-One portable terminal was not, in fact, hooked up to the PDP 11 below it. Instead, it was hooked into a Raspberry PiDP 8, which replicates that device’s front panel while still running Debian on the back end. The Data General terminal screen is an interesting one: it is electro luminescent. 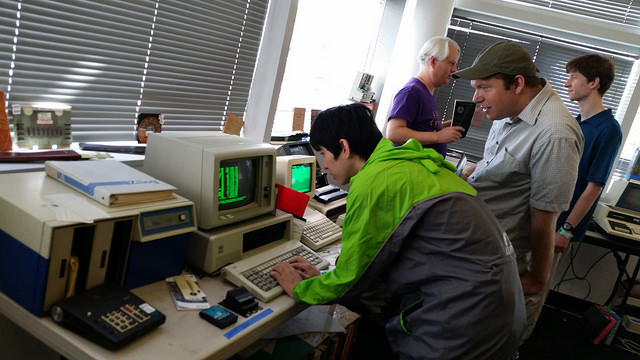 The VCF West featured a consignment area, where attendees could purchase old equipment such as 8 inch floppy drives, slide rules and old Macintoshes. This IBM PC was one of the more interesting items on consignment, particularly because it worked. 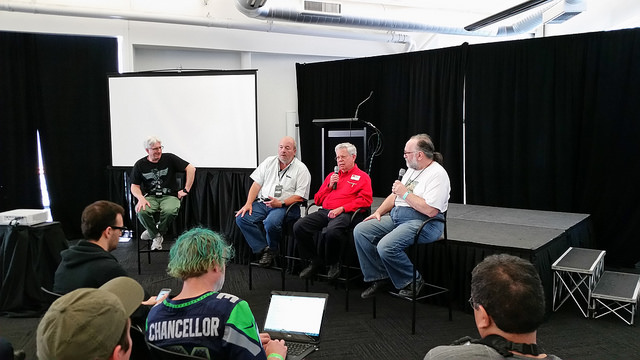 Talks included many on the topic of collecting computers from the likes of Sellam Ismail, Digibarn founder Bruce Damer, and VCF East founder Evan Koblentz. There were also talks from luminaries and pioneers, such as this panel featuring (from left to right) Al Alcorn the creator of Pong, Steven “Slug” Russell creator of Space War on the PDP-1, and Don Woods, creator of Colossal Cave Adventure. These three men, effectively, invented video games, each in their own way. 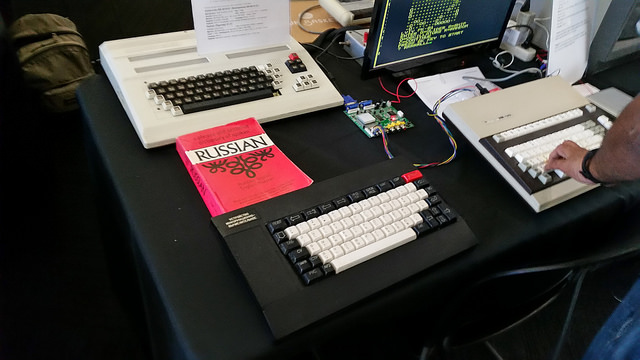 One last minute addition to the exhibit floor was this booth filled with Soviet-era computers. Most of these devices were simply clones of western computers, but the actual parts used inside of them were typically made in the Soviet Union. For this reason, the white computer on the right of this photo has keyboard springs that are physically difficult to depress. 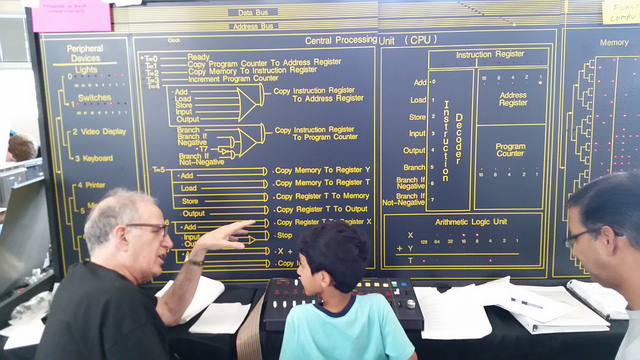 Gene Falk built this massive computer designed to explain the most basic functionalities of a CPU. This device has 32 bytes of memory, 8 instructions and around 450 LEDs. www.bigbit.com 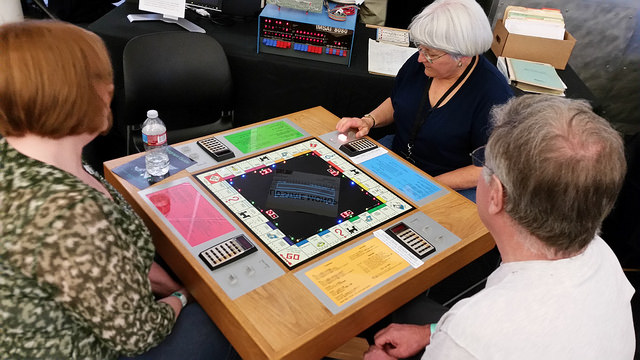 This is a solid state monopoly table. The table itself features embedded calculators and buttons for rolling LED dice and keeping track of cash on hand. Green LEDs illuminate when a house is built, red when a hotel is created. Created by Stephen Casner, the entire contraption was originally controlled by an IMSAI 8080, but has since been replaced by an S-100. 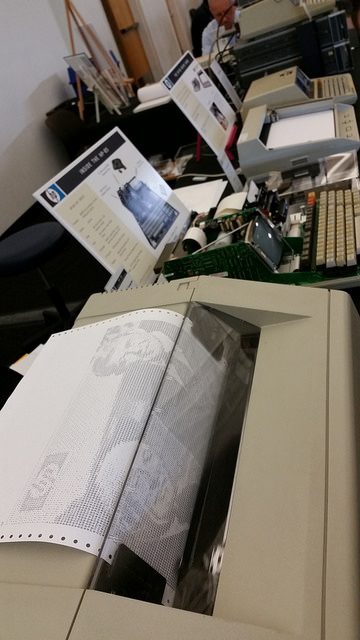 Marc Verdiell offered an extensive display of HP-85 computers and accessories. Attendees were invited to start printouts from these devices, both on plotters and dot matrix printers. Visitors were allowed to keep their printouts.