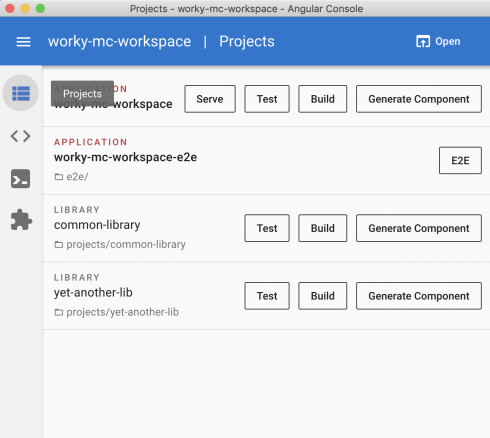 A new developer tool is being introduced into the Angular ecosystem to provide a simpler UI for the Angular CLI, the command line interface for the open-source front-end web application platform. Angular Console has been under development for the last three months by Angular development consultation company Narwhal and the Angular team.

It was designed to provide utility for Angular developers of every skill level and adheres to the Angular CLI core concepts, Daniel Muller, lead designer and front-end architect on the project, explained in a blog post.

The core concepts of the solution include workspaces, “which can be thought of as being analogous to an individual git repository;” projects, “which represent a reusable library;” and architect commands, which “define the manner in which a project should be built, served, linted or tested,” Muller wrote. The console provides UI elements that help developers more quickly and plainly interact with these command line features.

Muller wrote that Narwhal is in the process of migrating development of the Angular Console over to Google’s Angular Team, which will make its project an official tool.

“Angular Console is meant to be a community driven product,” Muller wrote. “Its purpose is merely to make you, Angular developers, more effective and efficient at creating beautiful applications and libraries. Any features we’ve introduced into Console at this point and any features we will introduce in the future have only this goal in mind. Ultimately we want the Angular community to define what console will become going forward.”

In addition, the Narwhal team is in talks with the Angular team to adapt Angular.io guides for the console.