It’s not easy to find source code in an art museum. The NY MOMA began displaying video games around 10 years ago, and as a supplement, the popular Manhattan art museum offered up one of Ben Fry’s Distellamaps: printouts of the assembly language that makes up Pac-Man for Atari 2600, graphics and gotos and all.

Until May 14, NY MOMA was the only major art museum in the world showing off source code as art. Plenty of museums had already displayed art projects encompassing software aspects, but these typically resulted in videos, interactive displays, or other compiled software assets merging into the background to form a larger artistic whole.

But on May 14, SFMOMA reopened its doors, displaying seven floors of art ranging from Duchamp in the 1920s to Pollack in the 1950s. Among this newly reopened collection is an exhibit known as “Typeface to Interface.” In it, graphic design is curated through posters and signs up until around the 1970s, when computers began to be used in graphic design work.

Thus, it’s not odd to think that SFMOMA would display such elements as a 1961 IBM Selectric typewriter (the first with a changeable font), or the notebook of Susan Kare (the lady behind the design of Apple’s original desktop and interface icons) displayed right next to an original Macintosh 128K.

Wandering through the “Typography to Iconography” exhibit, it’s very easy to miss what is, perhaps, the most unique and undocumented work in the collection: Cybernetic Landscapes. The work is displayed as a handful of photographs, coupled with about six sheets of perforated printer paper with the source code for the work. The project dates back to 1971.

A good pedigree
Marcus began his career as an artist shortly after earning his bachelor’s degree in physics at Princeton. In the mid 1960s, he landed at Yale’s art school and began studying graphic design. At the time, he thought himself a useless, quaint individual, having studied art and the fundamental forces of the universe, two things that seemed very opposed at the time.

In 1966, Marcus took his first computer course, and that would have a profound effect on his life’s trajectory. In 1967, Bell Labs came to campus, recruiting students for its then wacky skunkworks projects in New Jersey. He felt that the interview was pointless, as Bell Labs would have no need for a graphic artist in its computer department. After all, computers couldn’t generate graphics at the time. Of any kind.

But Marcus was very quickly hired as a summer intern, and then went on to continue working at Bell Labs as a full-time employee. He said he sat next to Dennis Ritchie, and often saw innovators like Max Mathews, father of computer music, and early computer arts pioneer Ken Knowlton.

Thus, Marcus got his start writing software on a GE-635, creating a program to build a telephone directory that could be read through a picture phone Bell had introduced at the 1964 World’s Fair. He even attempted to build a rudimentary desktop publishing and graphic design tool for the device.

Bell Labs was not just about business software at the time. A. Michael Noll and his crew were using computers to randomly generate Mondrian paintings, and Marcus saw this as a great direction for this newly created science.

Thus, when Marcus was wandering through Princeton’s campus one day in 1971, he stumbled onto an aircraft-landing simulator. The 3D landscapes of the simulator, ostensibly running on a vector screen, inspired him to create a 3D landscape of his own. And so, with the help of a ridiculously rare Evans and Sutherland Line Drawing System-1 (LDS-1) and a PDP-10 at Princeton, Marcus set about creating his three Cybernetic Landscapes.

Only one of these landscape programs hangs in the SFMOMA, but all three have similar designs and goals, said Marcus. SFMOMA curatorial staff lists the program as having been written in FORTRAN, but this is incorrect. The language is a specifically crafted FORTRAN-like graphical language designed for the LDS-1.

Marcus created a fully 3D environment that could be navigated with a joystick. The viewer, or player, could explore the landscape however they chose, and could find secrets hidden in the world.

“I thought, ‘I can place a person in this space,’ ” said Marcus, speaking of how he added a virtual human within his world. “As the viewer is moving around…the viewer might or might not find this person moving around in the landscape. The landscape was designed as a square, with a sacred way down the middle from north to south, and along the sacred way were Burma-Shave signs,” he said, referring to the old shaving cream ads along the U.S. highway system.

“I thought, ‘I will put Burma-Shave signs along the way with basic verbs of life on them. The things we must master and do.’ Eat, love, die, grieve, I forget the sequence,” said Marcus.

“I also wanted to have a piece of dynamic sculpture. I put a twirling whirlpool of alphabetic characters off to the side of the road. I put a forest of lines in too. I loved the effect of cornfields as I drove along the highway, and the interplay of plants coming in and out of alignment as you drove by them.”

The LDS-1 is such a rare and complex piece of machinery, neither SFMOMA nor anyone else in the intervening 40 years were able to get these Cybernetic Landscapes running again. The needed equipment, the LDS-1 itself, was only ever produced in single-digit numbers, with the CIA being customer No. 1. 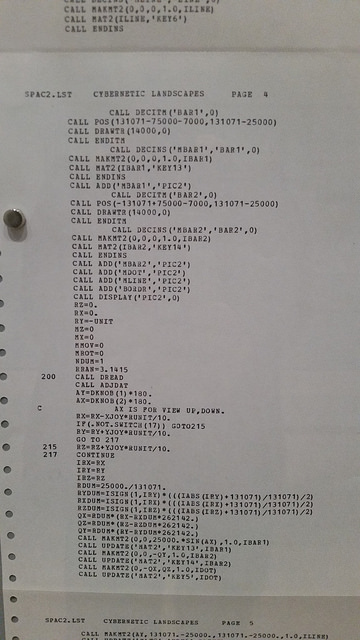 Compound this with the fact that the LDS-1 used a very primitive form of the active shutter system used in home 3D televisions today. While today we use electronic glasses with LCD lenses that open and close rapidly, creating the illusion of 3D, the LDS-1 used a large rotating disc that the user held in front of their face to create the same effect.

Joseph Becker, assistant curator of architecture and design at SFMOMA, was intrigued by Marcus’ work, but remains unsure of what to do with it longer term. Running the Cybernetic Landscapes on original hardware is far outside of the purview of SFMOMA, and the entire museum is currently trying to figure out how best to preserve source code that is donated to its collections.

“I’ve done projects that have integrated software,” said Becker. “I curated an exhibit in 2012 called Field Conditions. We showed the piece, and then alongside it we showed the wireframe of what the computer was doing before adding an extra layer of manipulation so you could understand it was generative software and the rules were outlined that would set up the conditions for the rest of the art to evolve out of.”

While this may seem odd to consider a set of instructions (like source code) to be art, SFMOMA also has a collection of the works of Sol LeWitt, some of which only exist as a set of instructions to be implemented by an artist at the gallery where the piece is to be displayed. To this end, SFMOMA has a room full of walls covered in lines and colors, drawn according to his instructions, and will be painted over when a new exhibit is brought to the space.

Becker is not alone in trying to figure out the world of software within museums. New York’s MOMA has its entire collections list available on GitHub as a CSV. Cooper Hewitt, however, offers its inventory as JSON data. Yet, to date, none of these museums have uploaded actual artistic source code to their GitHub accounts.

“We are part of this large artist initiative,” said Becker of the work SFMOMA is doing to figure out how to preserve and display source code. “We are in dialog with [NY] MOMA and the Tate. We’re right in the middle of this. It begs for more cross-collaboration across institutions.”