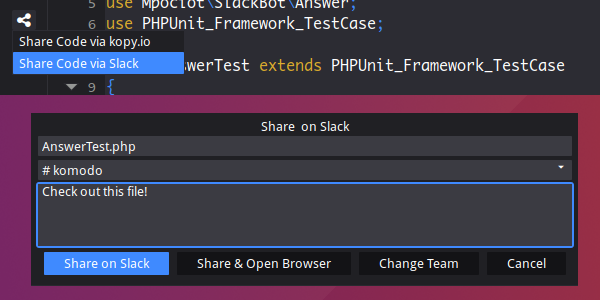 ActiveState wants to give developers more functionality and tools to make their lives easier, so the open-source language company updated its Komodo IDE v10.2 to integrate with Slack. The IDE also includes new support for languages and package managers.

The last major update to Komodo IDE added more functionality for web developers, and when Komodo IDE 10 was released in May 2016, it featured updates for web and mobile app developers, including integration for build systems like Cordova, Grunt,  and PhoneGap, and in the past ActiveState has added support for Docker and Vagrant, said Jeff Rouse, director of product management at ActiveState.

(Related: Test automation is on the rise)

The ultimate goal for Komodo IDE is to be “configuration free,” he said, adding that ActiveState has been focusing on integrating technologies more and more into Komodo IDE so developers can just start it up and be productive immediately.

“Based on our survey last year, developers wanted to see expanded support for test-driven development and behavioral-driven development,” said Rouse. “In this release we responded with an overhaul to our unit testing functionality. Additionally, our Slack integration and Yarn support are two key highlights of this release. We also provided support for latest Ruby on Rails and Tcl 8.6.”

In the coming months, Rouse said the company plans on working on its next-generation Code Intelligence functionality, which will “further enhance Komodo’s ability to predict your auto-completions in a variety of situations where we require more advanced logic to provide the most likely completions.” He added that this will improve developer performance, allowing it to get more accurate code completion suggestions faster, leading to a quicker development cycle.

And, as part of ActiveState’s move toward a unified product stack, it will offer additional support in Komodo for Perl, Python and Tcl developers. It will also expand support for Go, Lua, Node.js and Ruby, which are the four new language distributions ActiveState is releasing this year, said Rouse.

“[Also,] PHP continues to be a significant interest to our Komodo users, and we are bolstering its support in upcoming release,” said Rouse.