Becoming Agile in the knowledge economy 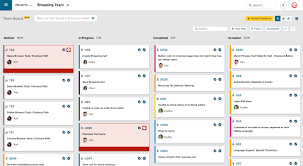 How do organizations effectively identify, plan and sequence work across the whole enterprise and across product portfolios, especially in the knowledge economy and new way of working? And how do you then have proper management and governance of that? These questions are top of mind in an Agile world and questions Rally Software from Broadcom are helping organizations find answers to via its application life cycle management (ALM) platform.

RELATED CONTENT:
The new age of Agile: Evolving from teams to the entire business

Christopher Pola, executive advisor at Rally, says, “So you’re abiding by the principles of product flow and lean, agile enterprise because the reason why people aren’t getting benefits is they’re still managing the work and the people in a very traditional way. An example of that mindset is efficiency: We value efficiency foremost, right? That means everyone has to be working 100 percent. But when dealing with the knowledge economy and the front line, workers have more knowledge than their management, and there’s so much variability, nothing homogenous in terms of tasks, nothing’s repetitive. Capacity, efficiency, and utilization is a very bad metric to run your organization on.”

Enterprises need to think differently in terms of whether it manages the people, process and technology, or the people’s scope and time. It needs to allow for variability, cycle time, and innovation. Then those changes need to be brought into both planning and execution.

Laureen Knutsen, executive advisor and head of solution architects at Rally, describes an example of an actual customer: “They mentioned that they were doing resource utilization and the resource utilization people were very proud of themselves because they said they had 100 percent utilization. I asked them how they’d done that. They said, ‘We keep track of every project. We had somebody come up to us and tell us that they finished with a project, not just a task, a project, two hours early. So we gave them a two-hour task to fill their time so they were 100 percent utilized. I asked them if anyone had told them again that they were done early, and they hadn’t.”

That organization was making people less productive by trying to be 100 percent utilized at a consolidated level. The organization had a few thousand people on its team and it was trying to manage 100 percent of everyone’s time. That’s vintage resource management and an upper level of process that needs to change so the team can actually get to true productivity and predictability within itself.

Changing that methodology entails getting down to the fundamentals of where adverse practices first started. Knutsen says that at first you’re guessing and placing bets when you’re strategizing. Then you need to let the teams estimate the work and tell you what they can really get done and have your teams work on becoming extremely predictable. Not just at the team level. When the teams become extremely predictable your projects will end up becoming more predictable. Your people will get very productive in that type of environment.

Rally visualizes everything from strategy all the way through execution. There are many types of business levels that you can tie to that top-tier strategy regardless of how long that’s going to take you to complete the strategy. You can tie it all the way down to the two-week iterations. Like breaking it down through whatever steps the company normally takes.

Another challenge that needs to be overcome is that often the people doing the planning are not the people doing the work. Pola says, “First, this is all bad in a knowledge economy because your knowledge workers are the ones that have the skills. So we do that, we put the plans in place. When we manage to go to plan, then any variance from that plan, even if there’s value in changing the plan, we deem to be bad.” The result is managers manipulating spreadsheets to show a good report. Pola adds, “People don’t have the data right. They’re manipulating the data to run their businesses, and it’s not accurate. It’s not what I like to think of, which is a principle beyond budgeting. It’s an open and ethical information system that provides one truth across the organization.”

Pola believes the biggest improvements will come when decentralized decision-making becomes the norm because fundamentally it will help companies realize exponential improvement in cost optimization, innovation and make for happier people.