Scaling agile: All hands on deck 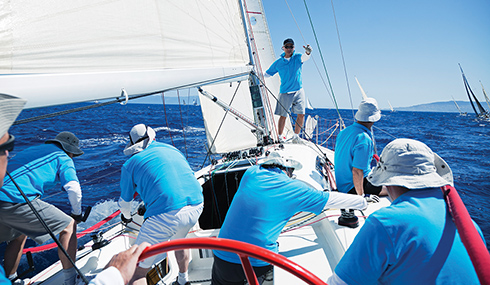 As agile practices extend out vertically and laterally, an organization’s ability to manage resources and change is continually challenged. Velocity can suffer, team members can burn out, and outcomes may be less than optimal, but a few simple adjustments can help overcome obstacles and minimize friction.

Have the right resources in place
Agile teams usually involve several stakeholders, but not all of them may be as involved or committed as they should be. “While it’s still a challenge to collaborate across development and testing, most companies have at least begun to integrate those two roles effectively,” said Pete Behrens, founder and president of Trail Ridge Consulting, an agile consulting form. “Where you start to see some challenges are with the more auxiliary roles and the roles that don’t typically have to be on every team.”

When forming cross-functional teams, organizations sometimes focus on roles but overlook the necessary skill sets. Damon Poole, chief agilest at IT recruitment firm Eliassen Group, said that when people organize teams by roles, teams can balloon to 20 people—including a developer, a quality assurance engineer, a database administrator, a graphics designer, an architect, a user experience designer, platform experts, a product manager and a Scrum Master—when a group of five to nine multitasking team members may have all the skills necessary to do the job.

“One of the mistakes I see is people thinking about agile in terms of development,” said Poole. “They’ve got their developers to go agile but they haven’t gotten the business, QA and architecture.”

Even when the various stakeholders have bought into the idea of agile, they may not understand the full scope of their responsibilities or have the organizational support they need to support the team effectively.

“We’ve seen a common trend recently where you have someone who comes to the meetings and sits in because the real people with business ownership are just too busy,” said Dennis Bowne, managing director at technology consulting firm CapTech Consulting. “That’s a sign that the business needs to understand how their jobs are changing as the business transforms down the agile pathway.”

Behrens said one lingering challenge is the contractual relationship between business and IT. “If the organization expects the team to be on the IT side, the business is going to provide input but not really participate,” he said.

Quite often, agile ways of working can be at odds with the way things have always been done. The challenge is figuring out how agile can be applied effectively within the context of a group or organization and what organizational change is necessary to support it.

“In an organization I worked in recently, the management between two groups was starkly different, and it impacted their ability to implement agile,” said Collin Lyons, cofounder of Flowmotion, a consulting firm that focuses on organizational transformation.

“One was saying all the right words, but nothing had changed. The other one fully embraced it. The question is how to do cultural change, not how to get people to do agile. It starts with leadership behaving the way they want the culture to behave, so they are sending the right message. To do that, they have to understand what it means to be agile.”

Make sure the math adds up
It is common for at least some people to work part-time on agile teams. In addition to dedicating a percentage of their time to a particular assignment, some have day-to-day responsibilities, while others are spreading the rest of their time across other assignments.

“I was talking to a guy whose team was complaining about multitasking 10% on this project and 20% on that project because they’re assigned to different teams,” said Kirk Botula, CEO of the CMMI Institute, a subsidiary of Carnegie Mellon University’s Carnegie Innovations. “People throw agile out as a means of achieving speed, but if you want to throw sand in the gas tank, just start dividing people’s time.”

While fractional commitments may look good on paper, the results can include resource over-commitments, priority conflicts, less-than-optimal results and individual contributor burnout. In addition, variances in individual team members’ capabilities may be overlooked that negatively affect delivery schedules.

“You have to consider the velocity of resources because things are moving very quickly,” said Ricky Raisinghani, a director at management consulting firm PricewaterhouseCoopers. “If it takes a veteran who understands the technology 100 hours, but I use someone who isn’t as experienced and doesn’t understand the technology, it may take that person 200 hours. If we don’t account for that velocity, it will create issues within the project timeline.”
#!Train everyone
While there are role-specific training courses like Certified Scrum Master, every stakeholder should attend Agile 101-type training courses so that everyone understands the basic concepts, terminology, and what he or she can do to help make agile efforts more successful.

“Scrum Master and Project Owner training are ineffective at organizational change,” said Trail Ridge Consulting’s Behrens. “The expectation is you go to one of those trainings, and then as a Scrum Master, you apply this and teach others. But we’re not seeing that work.”

All of the consultants interviewed for this report advocate basic training for stakeholders to attend as a team so they have a common frame of reference and can hear first-hand the questions and concerns of other roles directly.

“Everyone who’s involved, starting with the top-level brass all the way down, needs to understand the changes that are happening in the organization, what that means to them, and how they can support it,” said CapTech’s Bowne. “If you don’t understand why you’re getting requests about a particular cadence, what a sprint is or the terminology, it’s going to become very confusing very fast especially as organizations try to roll agile out across the enterprise.”

One of the reasons training is so important—and one major fact often overlooked when extending agile out across an enterprise—is that agile ways of working affect organizational cultures and vice versa. Because that is true, change management should be part of the process.

Even when organizations have done a great job of bringing people into agile concepts, new hires and those joining teams later may get left out. “Without training, you’re going to end up doing things the old-fashioned way, and you’re not going to understand the critical pieces of the engagement,” Raisinghani said. “When folks join the project late, make sure there are leads that can take them through entire projects from scratch so they’re not thrown into the fire. It takes a whole team to be successful.”
He and others stressed that “success” also requires the buy-in and support of leadership, which means that leadership also needs training, not just the project team.

Another common mistake is placing too much faith in one-off training when agile ways of working require constant evaluation and refinement.

“Not many companies understand the investment necessary to make agile work,” said Behrens. “Agile is an ongoing approach that’s constantly changing, and there needs to be assessment of that and constant evaluation of change through that.”
#!Manage teams like teams
Ideally, agile teams are co-located, but most organizations have distributed teams working across time zones. Since agile and distributed teams are no longer considered mutually exclusive concepts, some lingering challenges are giving rise to creative solutions.

“Everything we do at a distance means making some adjustments,” said Flowmotion’s Lyons. “What we want to do is ask what principles we’re trying to uphold regardless of context and how we’re going to accomplish that in the context we’re in.”

Distributed collaboration is usually accomplished through videoconferencing, audio conferencing, e-mail and a collaboration platform, although it is also important to create an extended team environment. For example, PricewaterhouseCoopers’ teams schedule a two to three hour overlap between onshore and offshore teams.

“Critical fast-paced sprints require back-and-forth. You can’t wait an entire day,” said Raisinghani. “During the other hours, teams use a common spreadsheet that’s shared via a common collaboration platform so that issues can be logged and resolved expeditiously.”

Others recommended having overlap during standups only, or restructuring teams to maximize collaboration, such as replacing a testing team in Russia with an entire project team.

“You don’t have to work the same schedules, but you do need to come together for the ceremonies,” said Eliassen Group’s Poole.

“Maybe some people get up early or go to bed late, or you move the meeting to another time. If you can’t do that, you have to ask yourself whether you’re trying to minimize cost or maximize value.”

“The biggest challenge I see is viewing agile as a single value set,” said Behrens. “Many companies have value systems that don’t necessarily align with Scrum very well, [so] trying to create cross-functional teams in these organizations is counter-culture to what they are used to.”

One of his clients has two divisions that implemented agile differently. One focused on automation to speed up application builds, testing, deployment and feedback loops, while the other took a cross-functional, team-centric approach with the goal of breaking down barriers.

“Different organizations can take those different values and be successful going forward,” said Behrens. “We’re seeing mass adoption of agile, but we have a long way to go to be successful with it.”