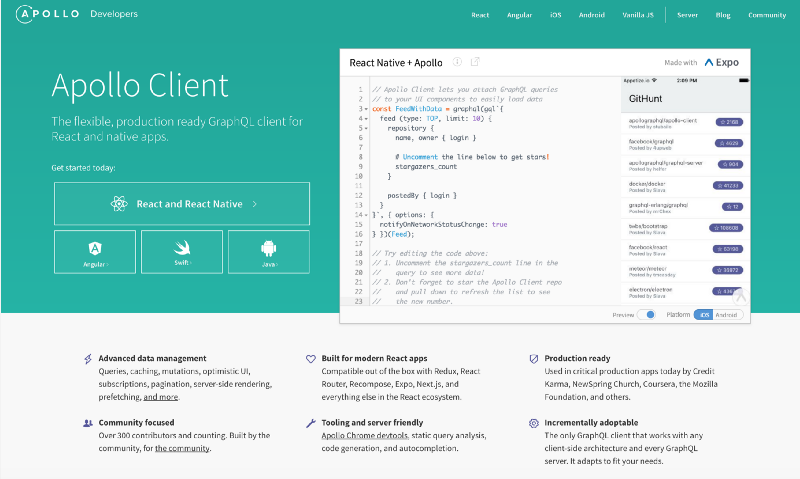 The Apollo Client is a client side library that leverages the power of a GraphQL API to handle data fetching and management for developers, letting them spend less time on “plumbing data” and more time building their apps, according to open source developer Jonas Helfer in a post.

The Apollo Client 1.0 works seamlessly with React tools like Redux and Recompose, it has integrations for Angular, Ember, Vue, Meteor, Next.js, and more. It supports GraphQL subscriptions and has its own set of Apollo Developer tools so developers can understand their apps.

More information on the features can be found here.

New design tools from Tizen .NET Developer Preview
Samsung is releasing its third preview of Tizen .NET, an application framework for Tizen app developers, with improved tools and features. The third preview should be available any day now.

The third preview supports the x86 emulator, and Visual Studio tools. Visual Studio tools for Tizen includes new features, like a project creation wizard, and a manifest editor. It also includes emulator managers, an emulator control panel and a certificate manager. Developers can also apply their C# skills, with standard APIs and Xamarin. More information can be found here.

With Mentor Graphics, Siemens can continue to invest in software solutions. The goal is “to link conceptual to the real, connecting virtual product development and production planning with the real production environment and lifecycle support,” according to Siemens.

Google releases new development tools
Google is giving game developers new tools to expand Actions on Google. Actions on Google are designed to enhance Google Assistant user experience by enabling developers to bring their own services in. The new features include a sound effect library to make game effects more engaging, and a guide on how games can work with Google Assistant.

For G Suite developers, the company announced a new issue tracker to help improve transparency and give more exposure to issues filed.

In addition, Google is launching a Google Brain team in Montreal to do basic field research. “I’ve seen firsthand how research in Toronto and Montreal has contributed to major advances in speech recognition, image classification and machine translation. And pairing Canada’s research pedigree with an active startup community, incubators, government investment and large anchor companies that attract and retain talent, is key to solidifying this country’s reputation as a global AI supercluster,” Geoffrey Hinton, researcher at Google, wrote in a post.

One of the big features introduced in GNOME 3.24 is Night Light. Night Light subtly changes the screen color according to the time of day. This can help reduce sleeplessness for those using the computers at night. The release also includes a new Recipes application, which contains recipes contributed by members of the GNOME community.

More details from this release can be found here.