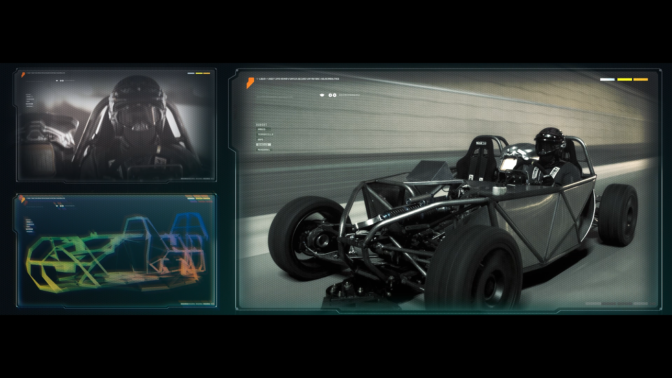 The team at Hack Rod, a California startup, is using Autodesk and NVIDIA GPU technology to create a car engineered with artificial intelligence and designed in a virtual environment.

The Hack Rod car uses concepts of generative design, which consists of computers that use AI to come up with design ideas on their own. Autodesk adopted this concept with Dreamcatcher, according to an NVIDIA blog post. The Hack Rod team rigged the car and driver with sensors so it could measure things like stress, and all that data was given to Autodesk Dreamcatcher to “generate new chassis designs,” according to the blog. This data was then fed to Dreamcatcher, which uses NVIDIA GPUs.

“The speed at which you can make decisions about your final product is unrivaled and when you start to add in AI/machine learning, it’s like you have 1,000 engineers working for you solving problems in a fraction of the time that it used to take,” said Mouse McCoy, Hack Rod’s founder, creative director and a former professional racecar driver. “It’s the democratization of manufacturing.”

Flynn lets developers deploy and manage their applications, like microservices, no matter what the combination of languages may be. Also, Flynn runs on databases like Postgres, MongoDB, and MySQL.

Flynn is used by Ops and IT teams, who can give developers access to infrastructure for development, staging or production environments, according to a blog post. Developers won’t need to build custom stacks for each app, language or framework when using Flynn.

Flynn can be checked out on GitHub or in IRC (#flynn on Freenode).

Implementing IPv6 for Internet support
Let’s Encrypt has announced full support for IPv6 since the IPv4 address space is “exhausted,” according to the company.

According to the Internet Security Research Group’s executive director Josh Aas, “More and more people are deploying services that are only reachable via IPv6,” so Let’s Encrypt added support for IPv6 so it can serve more people and organizations. In turn, this allows Let’s Encrypt to try to encrypt the entire web.

IPv6 is a new step that is being taken to allow the Internet to reach an even more people. In a video, Google’s chief Internet evangelist Vint Cerf said that IPv6 contains “340 trillion, trillion, trillion addresses.” Currently, there are 5.5 billion mobile devices, and if they all had Internet addresses, it would exhaust the IPv4 immediately.

He also added that IPv4 space has run, and now “we are compelled to implement the new one.” Without implementing IPv6, the current version would run out and people will not be able to access the Internet.