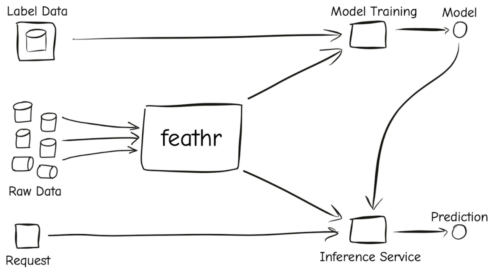 LinkedIn has announced that the most used, core aspects of Feathr, its feature store for productive machine learning (ML), are being open sourced.

Feathr works to address the problem of overburdening teams with the increasing costs of maintaining their feature preparation pipelines.

Feathr works as an abstraction layer that provides users with a common feature namespace for defining features and a common platform for computing, serving, and addressing them “by name” from within ML workflows.

Additionally, Feathr’s abstraction creates producer and consumer personas for features. Both roles can be played by the same engineer, producing and consuming features for their own project.

Feathr users have reported a reduction in the time required to add new features to model training workflows as well as an improved runtime performance.

According to LinkedIn, replacing application specific feature preparation pipelines with Feathr has reduced engineering time by as much as 50% and also allows for feature sharing between similar applications.

The team at LinkedIn is continuing to develop the ecosystem around Feathr with new infrastructure and tools, including the enabling of CI/CD for feature engineering. With this, customers will be able to create upgraded versions of widely-shared ML features that will then be tested against existing models that depend on that feature.