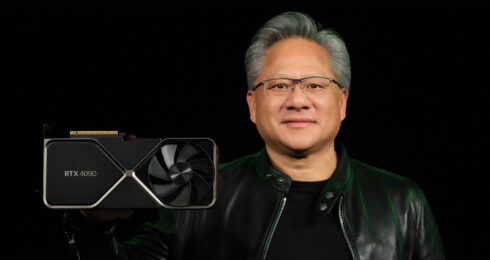 NVIDIA CEO Jensen Huang took the stage for a keynote at the company’s GTC conference and gave some exciting updates regarding new technologies from the company.

He announced the GeForce RTX 40 Series GPUs, which are powered by the company’s new Ada Lovelace architecture. Advancements in Ada include a new Streaming Multiprocessor, an RT core with twice the ray-triangle intersection throughput, a new Tensor Core, 1.4 petaflops of Tensor processor power, and the latest version of NVIDIA DLSS technology.

He also announced that the next-gen Hopper GPU is in full production and will be ready to ship in a few weeks. Grace Hopper combines the Arm-based Grace data center CPU and Hopper GPUs. It will significantly increase fast-memory capacity and be ideal for recommender systems. Systems with Grace Hopper will be available in the beginning of 2023.

Huang went on to announce DRIVE Thor, which is a processor that can be used for robotics, medical instruments, industrial automation, and edge AI systems. It combines the transformer engine of Hopper, the GPU of Ada, and the CPU of Grace.

Another update is the Nemo LLM Service, which is a cloud service to adapt pretrained LLMs (large language models) to perform specific tasks. According to Huang, LLMs are the most important AI models of today and can be used to understand meanings and languages without supervision.

“Today, we announced new chips, new advances to our platforms, and, for the very first time, new cloud services,” Huang said. “These platforms propel new breakthroughs in AI, new applications of AI, and the next wave of AI for science and industry.