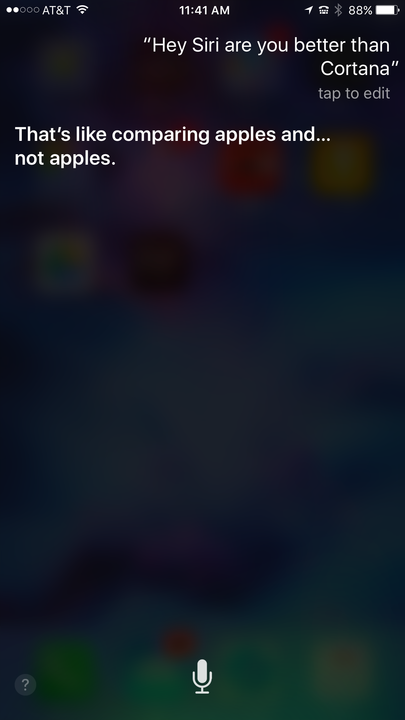 When you ask Siri what she thinks of Microsoft’s personal assistant Cortana, her answers range from “I really have no opinion” to “I’d rather not say.” To any unsuspecting human, those might seem like reasonable answers, but in a girl’s world, the world of passive aggression, those are some fighting words. And that might only intensify after Microsoft announced this week it is making its virtual personal assistant available for Apple’s iOS-based cellphones.

To prove my point even further, I asked Siri if she was better than Cortana and her response was: “That’s comparing apples and… not apples.”

(Related: And someday, maybe even more digital assistants could join the fray)

Siri also recently got snippy earlier this year when a user accidentally called her Cortana. “Who’s Cortana? Who is Cortana? Maybe you should ask Cortana for the movie times,” she responded. The virtual assistant also has been known to lock users out of their phone if they call her Cortana. Thankfully when I called her Cortana her response was only “Very funny Chris. I mean not funny ‘ha-ha,’ but funny.”

But why does Siri have such a problem with Cortana? Perhaps it’s because there’s a new girl in iOS’ town.

Siri may sound like a jealous high schooler when it comes to Cortana, but to be fair she’s not the only one with the snarky responses. According to PCWorld, when you ask Cortana which of the personal assistants are better, her response is “Not to brag, but apparently I’m going to help save the universe in about 500 years.”

Is the iPhone big enough for the both of them? In typical girl world, the answer would be no. Unfortunately for Siri, she really doesn’t have a choice: It’s what the user wants. She’ll just have to do what all girls do in this situation, and bottle up her feelings until she explodes.

Me: Are you friends with Microsoft’s Cortana?