Machine learning (ML) and other artificial intelligence (AI) technologies are powerful tools with the potential to transform a wide range of processes for both consumers and companies.

Though many of these technologies are still commercially nascent, a number of startups have emerged that provide ML-based software solutions to enterprises. We believe that these “enterprise AI systems” will need to be developed, deployed, and monetized differently from other modern enterprise software startups, most of which are based on the Software-as-a-Service (SaaS) paradigm. This new model, which we are calling “Software 3.0,” encourages enterprise AI startups and their customers to collaborate on developing the software itself, and could therefore lead to a new form of upside-sharing between the parties.

As investors in young software businesses, we believe that a brand-new model for enterprise software services may be on the horizon.

The road to Software 3.0
Application software for business use emerged as a standalone category in the mid-1980s. Since then, software businesses have evolved through different phases, each marked by major technological shifts
and each with its own incentives for vendors and customers of enterprise software.

Software 1.0: Perpetually Licensed Software (c. 1985-2000). During the first phase of evolution, enterprise customers bought software from vendors and deployed it on premises. Contracts were financially structured as a large upfront payment to the vendor for a perpetual software license followed by a stream of smaller annual payments for maintenance and upgrades. This incentivized vendors to spend most of their energy acquiring new customers—once they collected a customer’s upfront payment, they had little remaining reason to help that customer integrate the software into their environment and ultimately be successful. Thus, the customer bore most of the risk of a successful software deployment.

Software 2.0: Enterprise Software-as-a-Service (SaaS) (c. 2000-2015). As broadband internet connectivity became ubiquitous in the late 1990s, it paved the way for the next phase of evolution in software businesses: SaaS. Instead of buying software and booking it as a capital expense, SaaS customers rented software hosted on the vendor’s servers, using a subscription model composed of equal recurring payments typically priced on a monthly basis. Customers could stop using a SaaS product at will, and along with it end the stream of payments they made to its vendor. Thus incentivized to ensure that customers actually used their product on an ongoing basis, SaaS vendors were typically in close touch with their customers through their customer success function and kept a close eye on metrics such as customer churn.

Software 3.0: Enterprise AI Systems (2015-present). As computing and storage have grown cheaper and digitization has become ubiquitous, enterprises are creating ever-increasing amounts of digital data. The availability of this data, and of cost-effective ways to process it, has led to the emergence of enterprise AI systems, or “Software 3.0”. Software 3.0 businesses create value for customers not by producing software code alone, but composite systems comprising code and data. In this phase, customers and vendors have a symbiotic relationship: Software 3.0 vendors leverage customer data to train their proprietary ML models and tune product experiences, while customers receive added value from the vendor through data network effects arising from the vendor’s customer base. This symbiotic relationship sets up equitable risk- and reward-sharing between the customer and the vendor, but also requires a period of investment from both sides before the full rewards of this model can be reaped.

How software 3.0 is developed: The rising tide that lifts all boats
The most important way in which Software 3.0 differs from previous phases of evolution in the software industry is its dependency on data. Advanced ML techniques, including deep neural networks, lie at the heart of enterprise AI businesses. These models are trained using sample data points from the relevant problem domain then are deployed into production, where they make decisions for business use. Software 3.0 systems must therefore be built by cross-functional teams of data scientists, data engineers, software engineers, and IT operations staff, using a different development life cycle than that used for “pure” software. These systems also require more rigorous tracking: while traditional software development only tracks the provenance of code and configuration in a given software release, Software 3.0 development must also track the training data used to shape the model, using controls for quality and provenance.

The best enterprise AI systems are built using a general cross-customer model that specializes to customer-specific data over time. Take, for example, an enterprise AI system for mortgage lending. The vendor developing the system may build a deep neural network model that learns cues for creditworthiness, train it on thousands of past mortgage applications, then deploy it into production at dozens of mortgage lenders that will use it to adjudicate mortgage applications. Once the general creditworthiness model has been deployed across individual lenders, it can adapt over time to local market conditions and feed local insights back into improving the cross-customer model.

This is where the customer’s investment in the system comes in. An individual lender using this system may have to contend with additional technical complexity, as well as the regulatory complexity of complying with fair lending, algorithmic accountability, and other AI-specific rules. Their data may also be commingled indirectly with data from other lenders to enrich the cross-customer model. In return for taking on this added complexity, the customer benefits from data network effects emerging from the system. The cross-customer model grows more accurate over time thanks to the cooperation of all customer deployments—thus, Software 3.0 systems are the rising tide that lifts all customer boats.

How software 3.0 is deployed: Rewriting the software startup playbook
We have just seen how Software 3.0 systems reach scale by aggregating customer data. This dependency on customer data means that their journey to production deployment, and eventually to scale, looks different from earlier generations of software systems.

Software 1.0 and 2.0 are code-only systems, built on processes and inputs that are entirely under the control of the vendor. Software 3.0 systems are different; the data that goes into building them resides within their prospective customers, and thus isn’t available to vendors unless they have an existing business relationship with the customer. In other words, Software 1.0 and 2.0 systems can be built and then sold, but Software 3.0 systems need to be sold before they can be built.

How software 3.0 is monetized: Sharing risk and reward
As mentioned previously, Software 3.0 vendors and customers have a symbiotic relationship: customers contribute data to enrich the vendors’ models and receive value from data network effects. This interplay transforms a relatively clean vendor-customer relationship into a more deeply coupled partnership. Relative to how such relationships have functioned in a Software 2.0 world, expectations and definitions of success will need to be reset on both sides, because customers and vendors will need to share the risks and potential rewards of a Software 3.0 project. 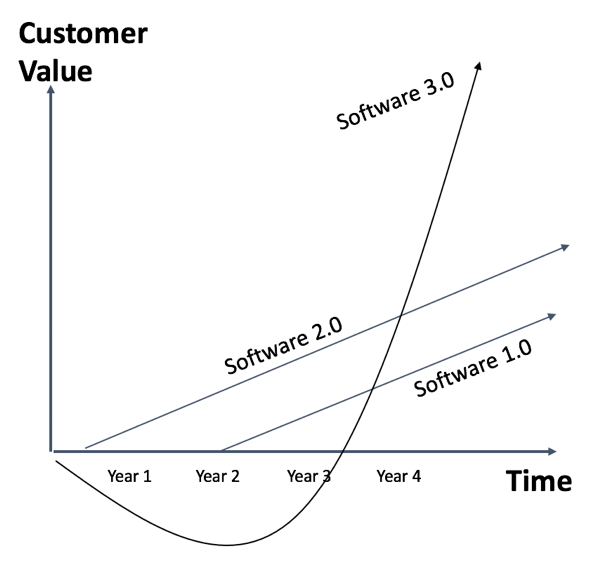 The concept of a J-curve (Figure 1) features prominently in venture capital, private equity, and other asset classes with portfolios of illiquid investments. Shaped like the letter J, the curve illustrates returns over time from the perspective of investors in these funds—the early years are a period of negative returns, with most gains happening later in the life of the fund. Likewise, early customers of an enterprise AI system will find that they need to be patient with their vendor partnership as the system emerges. A Software 3.0 vendor has a lot riding on their earliest customers because there is a sustained period of co-creation, data cleansing, and model customization to which the customer will need to dedicate meaningful internal resources. The return on these investments will not become apparent to the customer until data network effects kick in for the vendor. Once a critical mass of data has accumulated, however, customer value ensuing from a Software 3.0 system should increase rapidly and may even exceed the eventual value delivered by a corresponding Software 2.0 application. Understanding the dynamics of the J-curve for customer value is critical to managing customer expectations around project risk. To draw further inspiration from the world of venture capital, due to the disparity between the risk borne by earlier customers and later customers a Software 3.0 vendor should consider providing different incentives to customers as they work through the gestation phase of their system.

For Software 3.0 customers, the flipside of sharing risk is being able to participate equitably in both the value created by their bilateral relationship with the vendor and the value they bring to the vendor’s network of customers.

Advertising on the same path
To illustrate how different participants in the software value chain capture value and how that has evolved with the software industry, we turn to another industry that relies on scale and network effects: advertising. Software 1.0 customers had experiences analogous to advertisers working with ad agencies to create print and TV campaigns. Those advertisers paid significant money up-front for campaigns that were arduous and time-consuming to realize. Although advertisers derived some value from those campaigns, they were expensive and the value they drove was not particularly trackable. When online advertising emerged as an alternative, it enabled advertisers to launch campaigns quickly, control their daily budget with pay-per-click campaigns, and turn campaigns on and off based on granular information about which of them was working. This shift was similar to the emergence of Software 2.0—SaaS applications that enabled customers to sign up quickly, pay a fixed price per month, and end the relationship when they stopped seeing value from their purchase.

As trackability and attribution technologies have progressed, many advertisers now run revenue-share or affiliate campaigns where they pay ad platforms a percentage of the revenue they accrue—even if it amounts to more than they would pay per click—because it means less up-front risk to them. Given Software 3.0’s deeper customer-vendor partnership and the long-term benefits that can accrue to customers from data network effects, we believe that monetization models for enterprise AI systems should include scenarios in which customers and vendors share upside, in much the same way as they share risk in the earlier phases of their collaboration on the system.

Ramneek Gupta is the managing director and co-head of venture investing at Citi Ventures.

View all posts by Ramneek Gupta

Vishy Venugopalan is the senior vice president of venture investing at Citi Ventures.

View all posts by Vishy Venugopalan