HPE’s history of deals, a new sale, and a hopeful future 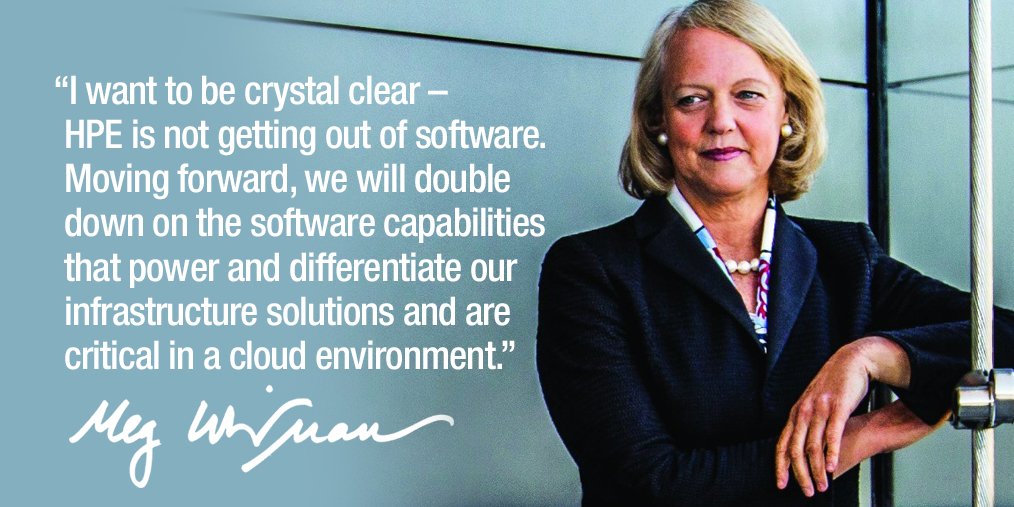 Hewlett Packard Enterprise started a new chapter this Wednesday when it decided to spin off a bundle of its software assets to U.K.-based enterprise software and information business Micro Focus, creating a new entity. This US$8.8 billion decision brings HPE’s long history of software acquisitions and spinoffs into the light, and possibly foreshadows a better strategy for the software giant.

The assets of this sale include HPE’s application delivery-management, Big Data, enterprise security, information-management, and governance and IT operations-management business. After the transaction is finalized, Micro Focus’ board of directors will include an HPE senior executive and HP independent directors of the board.

Additionally, the company will have annual revenues of approximately $4.5 billion and include nearly 4,000 salespeople globally. The split-merge will ideally bring the software assets of Micro Focus to HPE customers, employees and shareholders, and overall will allow HPE to become a more focused software company, especially during a time when customers are seeking new data center solutions along with software-defined servers and infrastructure tools.

A history of splits and sales
Fortune’s Jonathan Vanian suggested that HPE turned a page in 2015 when it decided to split into two businesses. At the time, HPE turned its focus on selling hardware to businesses looking to build data centers, while HP Inc. would focus on the personal computer market. The move, according to president and CEO of HPE Meg Whitman in an earnings statement last year, would continue to drive the company’s value and position it for a better future.

HPE continued to make changes and slim down its company in May of this year when it decided to combine its services business Electronic Data Systems with Computer Sciences Corp. Whitman joined the board, and Computer Sciences’ CEO Mike Lawrie served as chairman and CEO of the combined company.

HPE’s decision to slim down meant it could compete well with its software rivals, including Dell and EMC, which were at the time were planning their $60 billion merger that they finally completed on Wednesday.

The rumor this summer was that HPE was considering selling the assets from its acquisitions of Autonomy, Mercury Interactive and Vertica Systems. These acquisitions happened over the course of five years, with the Mercury being acquired first for $4.5 billion in 2006.

However, this new agreement with Micro Focus means that Mercury Interactive, Vertica Systems and Autonomy (an English software company) will become a part of Micro Focus. Whitman detailed this software transaction in an earnings call on Wednesday, highlighting the fact that Micro Focus will pay HPE $2.5 billion, while $6.3 billion of combined company stock will go directly to HPE shareholders.

On the same call, Wall Street analyst Toni Sacconaghi raised a question about HPE’s software business being primarily Micro Focus going forward, despite the fact that HPE is far bigger than Micro Focus from a revenue perspective, he said. The question he asked Whitman was why HPE did not extract a bigger price and create more value for shareholders.

Whitman said that Micro Focus is a pure-play software company that is an expert in managing software assets. She said the reason for a split-merge as opposed to selling the whole business is because the shareholders “will be able to ride the upside of what Micro Focus does.”

She added that in today’s world, technology changes at “lightning speed,” and HPE thinks that “the next four or five years is going to be all about speed, agility, and focus and innovation in something that is a more narrow focus.”

Getting back to basics
The big question right now is, if HPE is trying to be the biggest and best software provider there is, what’s the reason for this merger?

Neelan Choksi, president and COO of Tasktop (a software development company), said that HPE’s history of acquisitions and sales highlights this idea of “Whom do you want to be?”

He said that obviously four or five years ago HPE wanted to be a software giant that did a lot of different things, but recently with all these acquisitions and ventures, HPE is deciding what it really wants to focus on.

“I think [the split-merge] is a sign of what the competition is suggesting and what the market wants,” said Choksi.

Mik Kersten, CEO of Tasktop, said that it’s fascinating to look at this split-merge from Micro Focus’ side of the deal. He said that there is this long history of enterprise-grade tools that were first acquired by Borland (like StarTeam and Caliber). When Micro Focus acquired Borland in 2009, Attachmate in 2014, and Serena Software in May of this year, it put all of those large-scale software development and test tools under one roof, creating what could be the largest set of enterprise users that never had access to these tools, he said.

With HPE ALM software tools and solutions, and its quality-management center, it’s interesting to see all those tools coming together under one entity, according to Kersten. He also said that the reason these tools are so important for customers is that “most enterprises are spending a substantial portion of their IT budgets maintaining legacy systems, and these tools are entrenched in the life-cycle management of those systems.”

Also, these tools have evolved to manage software at scale, where end-to-end requirements management and compliance equally are as important as agility and team productivity.

“Another thing that’s very interesting about this acquisition is how it combines some of the other assets and tools and companies that Micro Focus purchased, and combines it with something that was never put together with that toolset before,” said Kersten. “I think that needs to be held onto, [like] the HPE ALM and quality center user base and tool chain that came from Mercury [Interactive].”

The other question that is being asked right now, according to Kersten, is how good this acquisition is for all of these enterprise customers that were already using HPE’s or Micro Focus’ software portfolios, especially the ALM and development or test tools, where they are stronger.

He said these tools coming together under one roof has its benefits, and an important factor that he sees is how the market is becoming more agile, more team-centric and leaner overall. He said that customers will be asking themselves what new innovations they can expect in the coming months or year, and what will happen to some of the tools they are already using.

Choksi added that the acquisition done right before HPE was Serena Software, which plays a big role in the new split-merge.

“It’s interesting when you take all the things [we mentioned] and add Serena Software, which Micro Focus acquired, and now add HPE on top of that and combine all of that together,” he said. “It definitely seems like there is a certain strategy by Micro Focus to go into the software development life-cycle tools industry, especially if you look at those two acquisitions.”

A new future in sight
The fact that HPE is appearing to become a more focused company, choosing to do things strategically to target high-growth areas where it has a chance to succeed, is a clear sign of the industry acting on trends around the shift to what the research firm IDC describes as the third platform, said Al Hilwa, industry analyst at IDC.

“In the last few years, there have been divestments of businesses across many companies where low growing or declining technology portfolios have moved to private investment companies,” he said. “We see that playing out with PCs and servers and other technologies.”

Hilwa added that over the last couple of years this has hit traditional software, which is showing signs of decline compared to software provided as a service or in cloud form.

While HPE may be putting more focus in infrastructure and the hybrid cloud space with this split, it’s also building up a war chest of cash with all of these transactions, said Choksi. He said that all of these merges and splits are generating income, and that probably implies that HPE is going to be in the market for more acquisitions in the near future.