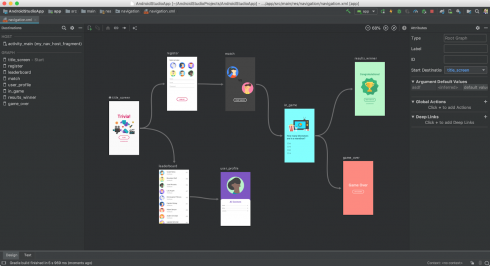 Google released Android Studio 3.3 this week with a strong focus on refinement and quality. The key updates featured a tidied-up UI, and support for IntelliJ 2018.2.2, Kotlin 1.3.11 and Clang-Tidy C++.

According to the company, the updates are a part of a broader plan for solidifying the feature set of the IDE that the developers of Android Studio call “Project Marble.”

The largest feature included in Android Studio 3.3 is the Navigation Editor, which Eason explains was previewed in an earlier release of the IDE but was held for quality improvements until now. The feature provides a visual editor for XML elements in order to visualize navigation and interactions between different screens of an app in development.

Other UI updates include a streamlined New Project Wizard with wider support for device types, languages and frameworks; the Delete Unused IDE directories option, which will help users clean up excess files from previous versions of Android Studio; and settings for providing Google with feedback from within the IDE.

For testing, Android Studio 3.3 introduces the ability to launch multiple instances of the same Android Virtual Device, Android 9 system images for the emulator, and improved save speed for saving emulator snapshots.

Finally, the IDE received optimizations that include better performance when using profilers, better memory profiler allocation tracking with expanded options, a network profiler for formatted text in common web formats like HTML, XML and JSON and frame rendering data in the CPU profiler.