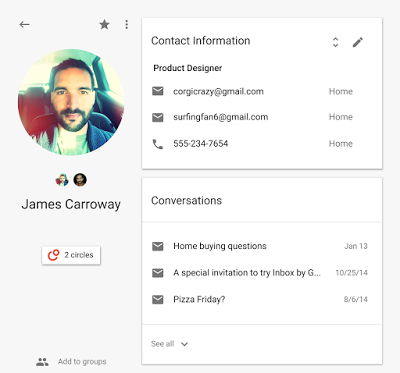 Google has released a new API designed to retrieve data from an authenticated user’s Contacts. Previously, developers had to make multiple calls to the Google+ API and Contacts API. The new People API is designed to provide developers with new protocols and technologies, and it aims to eventually replace the Contacts API.

With the People API, developers can merge data from multiple sources and APIs into one data source, and expose additional data such as private addresses, e-mails and birthdays for users who give permission.

“We hope that these new features and data along with simplified access to existing data inspires you to create the next generation of cool Web and mobile apps that delight your users and those in their circles of influence,” wrote Laurence Moroney, developer advocate, in a blog post.

Htop 2.0 comes with features and fixes
Htop, an interactive process viewer for Unix, has some new features and fixes with version 2.0. Htop is now cross-platform. This release includes code supporting FreeBSD, Linux, Mac OSX and OpenBSD.

The new features include:

Htop went from being a Linux-only application into a portable one. Its mission was to “aim to be a better htop.” For years, it remained Linux-only because the UI was dependent only on the portable library ncurses, while the entire logic for gathering process data was based on the /proc file system.

OIC announces new developer IoT toolkit
The Open Interconnect Consortium has announced it is updating its developer toolkit to help organizations navigate through its resources and further standardize the Internet of Things (IoT).

“IoT puts a lot of pressure on developers to create applications that work seamlessly. IoT technologies can be tricky and difficult to implement in a real-world use case,” said Mike Richmond, executive director at the Open Interconnect Consortium. “With this updated developer toolkit, the OIC is making the process significantly easier. As we continue to streamline specification development for the next generation of IoT-connected devices, this is an important step.”

The toolkit now offers oneIoTa, a solution that allows users to create simple models for any IoT device in minutes; as well as an API designer console that syncs with oneIoTa to help developers document APIs in an interactive console. It also makes it easier to engage with other application developers.

As Physical Web-enabled beacons are becoming widespread, developers are experimenting with the platform in various ways, according to a Google Chromium blog post. The feature enables users to opt in to interact with and receive content from nearby Bluetooth-enabled beacons. These beacons can be in public places like stores, stadiums or colleges.

Google’s blog post highlighted examples, like how a school uses beacons to distribute class notes, and how beacons were deployed at CES to replace marketing brochures. The support is initially coming to the beta version of Chrome for Android, so it will hit a select group of the app’s user base. Eventually, it will roll out to the official version.