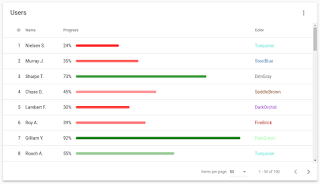 “Our goal is to build a set of high-quality UI components built with Angular and TypeScript, following the Material Design spec. These components will serve as an example of how to write Angular code following best practices,” the team wrote on its GitHub page.

The latest update features a new component dev kit and the data-table component.

The component dev kit is a standalone package that “will be especially useful for projects that want to take advantage of the features of Angular Material without adopting the Material Design visual language,” according to a blog post. The initial release features accessibility, text directionality, platform detection and dynamic component instantiation.

The <cdk-table> implementation features a fully-templated API, dynamic tables and an accessible DOM structure, according to the team. The @angular/material implementation provides data-table functionality with <md-paginator> and mdSort directives. “These directives provide a UI for pagination and sorting in-line with the Material Design guidelines without being tightly coupled to the data-table itself,” according to the blog post.