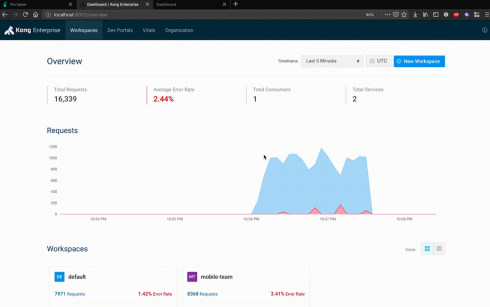 API platform provider Kong has announced the latest release of its enterprise solution, Kong Enterprise 0.34. According to the company, this is the most feature-rich release to date with new features and updates as well as minor fixes.

The 0.34 also features new integration of the Kong Dev Portal with the Kong Manager, featuring the ability to create a dev portal and control it through workspace, ability to better organization documentation and the ability to use global search. Other features include HTTPS support, admin API audit log, request termination plugin improvements, and logging plugins.

GitHub announces new updates to its learning lab
GitHub is making its learning lab available to enterprise customers to enable organizations to build developer skills through onboarding and training, without ever leaving GitHub. The learning lab was first announced at the company’s Universe conference, and since then the company explained tens of thousands of developers have taken advantage of the free, hands-on projects.

The Learning Lab features the ability to learn from GitHub, track learning, receive feedback, and show off accomplishments.

Google speeds up the removal of Google+ for consumers
In October, Google announced plans to shut down Google+ for consumer users that would take place over a 10-month period and officially take place next August. After a bug was introduced in a November software update, Google has decided to speed up the process. The sunsetting process will be completed on April 2019, instead of August. In addition, all Google+ APIs will sunset in the next 90 days.

According to the company, the bug impacted about 52.5 million users through the Google+ API.

“We discovered this bug as part of our standard and ongoing testing procedures and fixed it within a week of it being introduced. No third party compromised our systems, and we have no evidence that the app developers that inadvertently had this access for six days were aware of it or misused it in any way,” David Thacker, VP of product management for G Suite, wrote in a post.