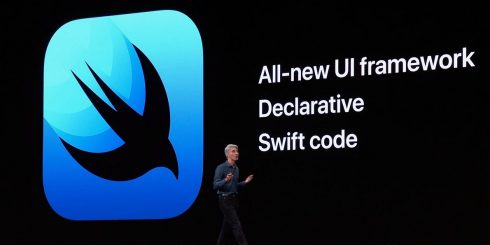 Developers will be able to choose certain UI components and get real-time visual feedback on how the code works in the app. Xcode can recompile changes instantly and inserts them into a running version of a developer’s app. In addition, changes are visible and editable at all times, according to Apple

SwiftUI users can also automatically utilize features like dynamic type, dark mode, localization, and accessibility without the need for writing additional code. The SwiftUI API can create apps native to all of Apple’s major platforms.

“One development team for the first time can build a single app that can span all the way from iPhone to iPad to Mac,” Federighi said.

Apple also announced its latest technologies for creating augmented reality including ARKit 3, which let’s developers integrate people’s movement into apps and enables facial tracking for three faces; and RealityKit, which provides a variety of animation, camera effects, and audio features.

Developers can also integrate Apple’s hardware such as the Apple Pencil and software features such as Siri into their own apps.