“Migraines are just really bad headaches” is one comment that those with a chronic migraine condition have to listen to, along with the other debilitating symptoms that migraines cause. Excedrin is looking to change this stigma with a new augmented reality that allows non-sufferers to experience what it would be like to have a migraine.

Excedrin, a brand of headache pain relievers, has created what it calls the world’s first migraine simulator. It uses AR to replicate certain migraine symptoms, such as sensitivity to light and sound, disorientation, and aura (a visual disturbance that sometimes creates spots or jagged edges), said the company in a release.

(Related: An emulator is ready for HoloLens)

Migraines affect 36 million people in the United States, according to the Migraine Research Foundation. But not every sufferer of migraines experiences the same kind of migraine.

“Even with the number of sufferers out there, migraines are still widely misunderstood—largely because those who don’t experience the condition can’t fully understand it,” Excedrin wrote on its website. “That’s why [we] created the world’s first migraine simulator… This technological innovation makes it possible for non-sufferers to see what a migraine is really like.”

With AR technology, people with migraines elected a person close to them to show them what it would be like to experience a day with a migraine. Some of the individuals in a video on the project’s website had to take off the AR headset because experiencing the aura or sensitivity to light was too much to handle.

A mother in the video hugged her daughter and said, “I’m so sorry you have to go through this.”

This technology sheds light on the condition, but for some migraine sufferers, like Sarah Emerson (a contributor to media website Motherboard), are upset that the company invested money in an expensive technology and not better medication.

She wrote that while augmented reality did mimic the physical and emotional pain of a migraine, it doesn’t really give the actual pain and suffering of a true migraine. 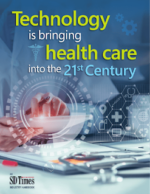