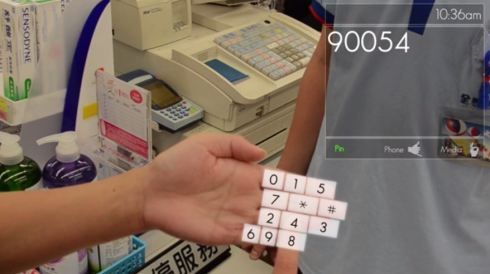 Amid the mishmash of augmented and virtual reality devices being strapped to people’s heads, a new development platform looks to transform your hands into a virtual keyboard, integrating gesture control and touch-based projection into AR applications.

Augumenta, a Finland-based wearables startup, debuted an SDK and developer tools defining a new user interface for smartglass devices at the Wearable Tech Expo in New York City. The Augumenta Interaction Platform, demonstrated on augmented reality technology such as Google Glass and Epson Moverio, allows smartglass application developers to integrate gesture vocabulary to recognize and execute commands, and to use APIs to access an interactive virtual surface toolkit to project images the user can reach out and “touch.”

“It’s an SDK that we can release to an OEM or app developer,” Augumenta CEO Tero Aaltonen told Wearable World News. “It provides an API upon which you can start building your apps. The long-term target is that we’ll be more closely integrated into the operating system.”

(Related: Samsung’s plans to turn your fingers into an AR keyboard)

The software is not yet available, but according to Aaltonen it will ship with six standard gestures, including open palm, thumbs up, thumbs down, the OK sign, a pointing finger, and a fist. Augumenta has tested more than a dozen gestures. In the demonstration (also shown in the promotional video below), a user has the ability to manipulate privately viewable images, such as entering a bank PIN number by tapping a virtual keypad on their hand.

Augumenta’s AR interaction platform comes with multi-platform support for Android, Linux, Tizen, iOS and Windows, though as of yet the startup has not announced any official agreements with the hardware makers to incorporate the development platform. The platform is currently in limited beta, but Aaltonen said the SDK will become publicly available by the end of 2014, with the virtual surface design and control functionality module set for release in early 2015.

Augumenta isn’t the first company to experiment with augmented reality gestures and projections (Samsung’s Galaxy Glass and the crowdfunded Atheer One use similar technology), but the developer platform is the first set of cross-platform developer tools and APIs to make this form of augmented augmented reality an actual reality.

As with any new technology, developers will be a driving force in the popularity and adoption of augmented reality glasses. Augumenta’s platform is still in its infancy, but putting gesture control and virtual touch tools in the hands of developers could signal the beginning of AR’s transition from novelty to mainstay.