Winning hackathon team develops sensors to save the bees

Bee colonies have been on the decline for some time due to environmental pressures, and it’s become a global issue that researchers, farmers, environmentalists, even average citizens are trying to solve. One software development team has joined the fight, and their small device with simple and inexpensive hardware might be one way to bring the bees back.

This year, the theme of the hackathon focused on the bee population and how technology or software could be used to stop the decline for the sake of global food production. The theme was a part of a Cisco corporate social responsibility initiative called “Connected Bees.”

Where are the bees?
When working on this project, Guidos’ team began to think about beehives that are placed out in the field so a farmer can have his property pollinated. They asked how one could determine how effective the placement of those hives were.

With this question in mind, Guidos and his team used a simple Raspberry Pi 3 with built-in communications, coupled with an inexpensive USB microphone, as a way to create sensors that can detect the buzzing sound of bees. This technology is able to listen for the buzzing to detect which areas the bees are visiting—and which areas they are not.

(Related: What GitHub’s numbers say about its projects)

The sensors also used Cisco’s Tropo, designed to automate communications by connecting code to a phone network with voice and messaging. Tropo is also good for voice alerts to let a farmer know if a predator is attacking their hive.

“If we find out that certain areas are not being visited by the bees, than we know [that] maybe relocating the hives a little closer might get the bees spread out a little better,” said Guidos.

The team also used a thermal imaging camera in addition to the audio sensor. Guidos said someone can place this camera next to a beehive to monitor its health, and it can detect whether the heat generated from the bees demonstrates activity in the hive. It can also detect predators, like a weasel trying to get at the honey in a hive, he said. 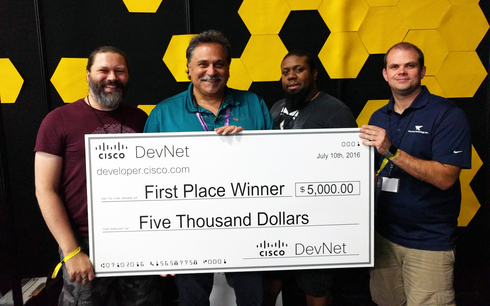 The team comprised a mix of employees from WWT and Asynchrony Labs. From left to right: Shawn Donoho, David Guidos, Timothy Fuller and Todd Erickson.

“The sensors are really useful for monitoring the health of the hive and for determining whether the bees are getting out to all the crops,” said Guidos. “We’re in an exciting time in terms of technology; there are so many of these little systems like the Raspberry Pi that are perfect for this sort of thing.”

To get the sensors to detect the bees and their buzzing, Guidos had to develop a program that listens for this sound. It would then then perform a fast Fourier transform, which determines what frequencies the microphone can pick up.

According to Guidos, bees’ buzzing is made up of “clicks” that sound between 190 to 250 times a second. Those clicks are actually pings, which are about 1,600 hertz at the end of each cycle.

“We have to watch and monitor for a certain range of frequencies to determine if it’s a buzzing of a bee or a car driving by, and the system filters it out really well,” said Guidos. “The frequency changes when the bees are inside the flower, and their buzzing is a whole different sound. So, we are experimenting with other methods of filtering the sound so that we can recognize the different types of activities the bees are doing.”

The team also wants to experiment with the software so it can detect other types of insects and eliminate their sounds. Bugs like grasshoppers or potential predators like hornets can be factored out to see what is actually harming the bees.

While this project is not Guidos’ or the other team members’ full-time focus, he said that “keeping bees healthy is so critical to our planet.” He wants to take the program he wrote for the sensors and put it on GitHub so other developers can get involved. “Plan Bee,” the name of their hackathon project, most likely will also be the name of it on GitHub.