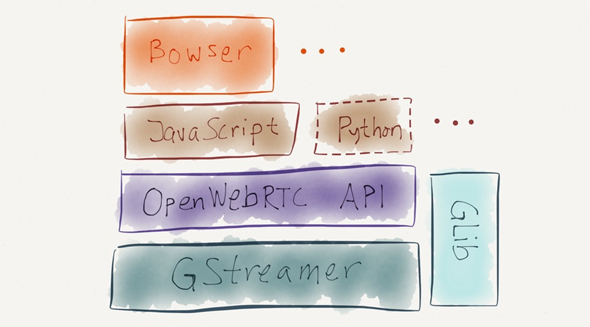 Ericsson open-sources OpenWebRTC and Bowser for iOS
Ericsson announced it is releasing OpenWebRTC—its implementation of the HTML5 in-browser audio and video technology—and its WebRTC-enabled Bowser iOS browser as open source.

Ericsson Research manager of media application and protocols Stefan Ålund made the announcement in a blog post, saying that Ericsson has already submitted Bowser to the App Store, which would make it the first WebRTC-supported browser on iOS. Ericsson has long been a contributor in the W3C’s standardization process for WebRTC, and OpenWebRTC represents a competing implementation from Google’s WebRTC implementation in Chrome.

“OpenWebRTC is built on the belief that the WebRTC standard would transcend the pure browser environment and that native apps, implementing the same protocols and APIs, would become an important part of the WebRTC ecosystem,” Ålund wrote. “This is especially true on mobile platforms where native app distribution is often preferred over pure Web apps.”

Ålund also announced the release of the open-source GStream multimedia framework to build OpenWebRTC-supported Web apps with cross-platform interoperability for Android, iOS, Linux and Mac OS X. The OpenWebRTC API layer is implemented primarily in JavaScript, with some Python.

Ericsson first released Bowser in 2012 for both Android and iOS, but pulled the browser in February of 2014 as by then Chrome and Firefox both supported WebRTC on Android.

Intel releases IoT developer kit
Intel has announced it is extending its Internet of Things Developer Kit by releasing the Intel XDK IoT Edition, a complete hardware and software solution for IoT app development, according to the company. The new developer kit is meant to help developers build IoT apps written in JavaScript, and also provides makers with the ability to create, run and debug apps on Intel Edison and Intel Galileo boards. In addition, the kit can be used to build an HTML5 companion app that runs on tablets, PCs and phones to control the IoT devices.

The IoT Edition is available as a free download for OS X, Ubuntu Linux and Windows.

MIT grad student Mohsen Ghaffari and Carnegie Mellon assistant professor Bernhard Haeupler, who did his graduate work at MIT, presented their coding scheme at the IEEE Symposium on Foundations of Computer Science, detailing how they adopted a technique called list decoding, which allows their algorithm to iterate long enough for the interactive coding scheme to handle the theoretical maximum-tolerable error rate for error-correcting codes.

Thanks to the innovation in list decoding, Ghaffari and Haeupler’s interactive coding scheme is the first to achieve optimal measures on all three criteria, a breakthrough in transmitting large chunks of error-free data between devices.