State of JavaScript: Programming language has a bright future

JavaScript is considered one of the most popular programming languages, but depending on which developer is asked, opinions on the current JavaScript ecosystem are either strongly positive or strongly negative.

That’s why Sacha Greif, a designer and coder living in Osaka, Japan, created a survey to see what everyone thinks about the current state of JavaScript. Developers clearly had a lot to say about the language, because in just over two weeks, he received more than 9,000 answers.

Developers answered questions on everything from front-end frameworks to building tools and testing libraries with JavaScript. The analyzed survey is divided into various sections, and the results are put into graphs that were created by using the open-source project Recharts.

Greif had support from egghead.io, a JavaScript tutorial site, and Wes Bos, a full-stack developer that teaches React and ECMAScript 6 courses. A full list of authors who contributed to the write-ups for the project is available here.

Is JavaScript too complex?
One of the big finds from this survey is developers think that building JavaScript apps is excessively complex right now. According to Greif, cold, hard data is valuable, but sometimes to really figure out what developers think about a particular language means really understanding how they feel.

“This gripe is definitely shared by a large proportion of developers. We’re enjoying the ride, but sometimes we just wish it’d slow down a tiny bit,” said Greif.

JavaScript flavors
When talking about JavaScript, developers aren’t just talking about one single language, said Greif. There are plenty of flavors of JavaScript, and they all have different levels of interest and satisfaction.

According to the survey, ECMAScript 6, CoffeeScript and TypeScript all have “near-perfect awareness,” which Greif found interesting since TypeScript isn’t that popular when compared to the other two flavors. 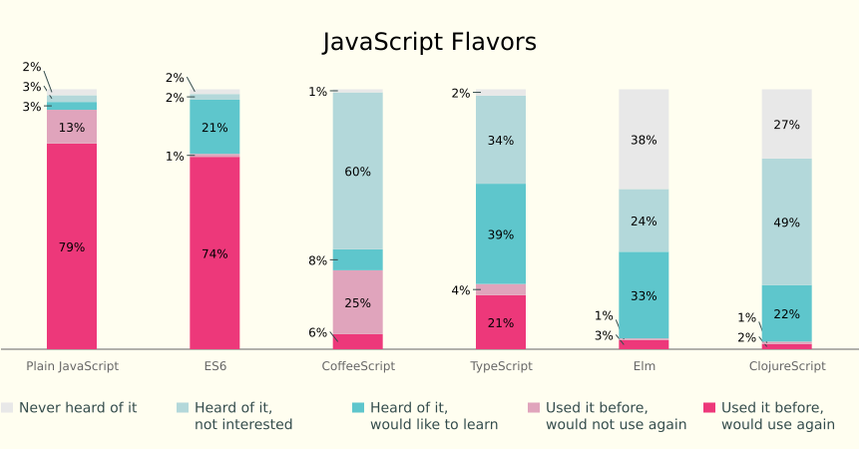 A large portion of developers are interested in picking up ECMAScript 6, but 89% said that they haven’t learned it yet, thought they want to.

Greif said that TypeScript and Elm have 53% and 58% interest scores respectively, though their users said they had a difficult time articulating their advantages to the average JavaScript developer.

The big winner for JavaScript flavors is ECMAScript 6, but both TypeScript and Elm also have high satisfaction percentages. CoffeeScript comes in behind these flavors, with only 17% of developers willing to consider using it again.

Looking at the future for JavaScript
While there are much data and responses to sift through, Greif said it’s fair to say that the survey provided some answers on the state of JavaScript. Some technologies came out on top, like React, while others proved to be on their way out, like CoffeeScript.

There are a few areas of the JavaScript ecosystem that still need to be addressed, especially when it comes to testing, state management or the API layer. Things that Greif might address in the next survey include: Will Redux be able to maintain its (relative) dominance? Will GraphQL replace REST? Will developers find a way to test JavaScript apps that they can all agree on?

Greif said that if he had to pick one conclusion to take away from this survey, it would be that the future does look bright for JavaScript. “Sure, the churn rate is high, but on the other hand each successive generation of libraries is making huge leaps in terms of maintainability and developer experience,” he said. “So it’s fine if the road is a little bumpy at times, because I’m pretty sure it goes in the right direction.”

With the success of this survey, Greif said he will do it again next year to see how the trend evolves. Developers interested in taking part in this survey can sign up here. Also, the full survey with data can be found here.