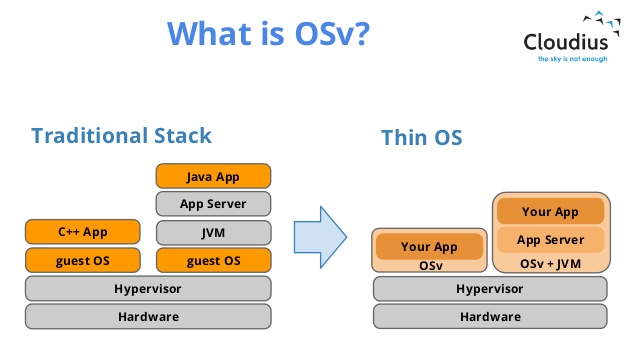 Cloud-based virtual machines are proliferating like mad, so it’s about time there was an operating system for them.

Created by Cloudius Systems, OSv is a new open-source operating system for virtual machines, designed to execute a single application atop a hypervisor. Written in C/C++, the cloud OS runs Linux applications on hypervisors such as VMware and Xen, and on virtual machines and cloud environments such as Amazon, Google Compute Engine, and Joyent’s SmartOS.

“Operating systems have evolved over decades to perform two distinct functions: manage the hardware, and provide isolation between the multiple applications and users running on the system,” according to the OSv FAQ.

OSv has APIs for new applications, and it also runs unmodified Linux applications and unmodified JVMs. In addition to Java, the OS supports runtime languages such as JavaScript, Ruby and Scala, with PHP and Python runtime support planned for future releases.

Rather than utilize Docker containers, the cloud OS uses a custom tool called Capstan for rapid VM builds of complete VM images running in any hypervisor on OSv. A private beta of OSv has recently opened, and more information is available on the OSv project site.

#2: Dragula, the most fearsomely simple drag-and-drop tool in all of Dragsylvania. Bleh bleh!

#3: Elevator.js, a “back-to-top” webpage button that behaves like an elevator, adding elevator music as a user smoothly scrolls back to the top of the screen. Give it a whirl.

#4: Sprint.js is a high-performance DOM library for modern browsers with a familiar, jQuery-like chainable API focused on bandwidth and resource-constrained mobile devices and tablets.