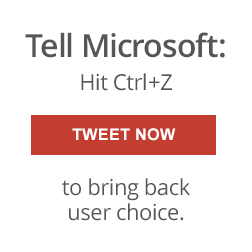 Windows 10 officially arrived this week, and not everyone is impressed. In an open letter to Microsoft’s CEO Satya Nadella, Mozilla’s CEO Chris Beard called the company out on what he calls a disturbing feature of Windows 10.

The latest release of the operating system automatically changes users’ default apps, such as making Microsoft Edge the main browser.

While it is still possible for users to modify their settings and defaults, Beard said Microsoft has made it more difficult for users to do so.

“It now takes more than twice the number of mouse clicks, scrolling through content and some technical sophistication for people to reassert the choices they had previously made in earlier versions of Windows. It’s confusing, hard to navigate, and easy to get lost,” he wrote.

According to Beard, this isn’t the first time Mozilla has reached out to Microsoft to discuss the issue, but due to the lack of progress Microsoft has made to address it, Mozilla is taking the necessary steps to fix it such as addressing Nadella and bringing it to the community’s attention. In addition, Mozilla is rolling out support materials and a tutorial video to help users restore their settings.

“These changes aren’t unsettling to us because we’re the organization that makes Firefox,” Beard wrote. “They are unsettling because there are millions of users who love Windows and who are having their choices ignored, and because of the increased complexity put into everyone’s way if and when they choose to make a choice different than what Microsoft prefers.”