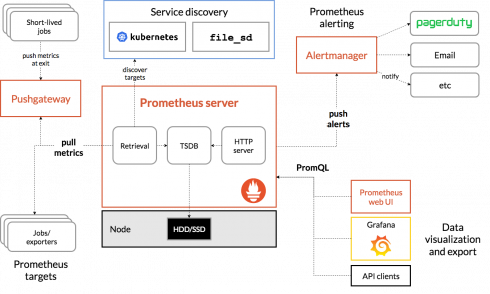 The Cloud Native Computing Foundation (CNCF) has announced the systems and service monitoring framework Prometheus from the foundation’s incubation program has now graduated. This makes it the second project to meet the CNCF’s criteria for graduation after Kubernetes in March of this year.

The news was announced today during the organization’s Prometheus-focused PromCon event in San Francisco. The open-source infrastructure monitoring platform’s new status means that it has met the CNCF’s requirements that the project “demonstrate thriving adoption, a documented, structured governance process, and a strong commitment to community sustainability and inclusivity,” and adheres to the CNCF Code of Conduct, among other accomplishments, according to the foundation.

Prometheus was started in 2012 by developers at SoundCloud to monitor their burgeoning microservice infrastructure and has since become a rapidly growing part of the Kubernetes ecosystem, the CNCF says. It entered incubation at the CNCF in 2016 with its version 1.0 release.

“Since its inception in 2012, Prometheus has become one of the top open-source monitoring tools of choice for enterprises building modern cloud native applications,” said Chris Aniszczyk, COO of the CNCF in the announcement. “Since being accepted as the second project in CNCF, Prometheus has cultivated an active developer and user community, giving the TOC full confidence to graduate the project. As a testament to its maturity, we’re thrilled to see the Prometheus community spin out OpenMetrics, which takes the Prometheus exposition format and works to evolve it as a de facto industry specification.”

With 20 active maintainers, more than 1,000 contributors, popularity among major companies like DigitalOcean and Uber and integration with Kubernetes, the CNCF and CoreOS team, frequent contributors to the project expect Prometheus to continue growing in popularity.

“[GitHub] stars are an imperfect metric, but they do give a good coarse grained measurement for the popularity of an open source project,” software developer Frederic Branczyk at CoreOS wrote in a blog post congratulating the Prometheus team. “Over the years Prometheus has grown in popularity and this metric reflects that popularity. Within the last two years it grew from 4,000 stars to 18,000 stars on GitHub; even though this is a popularity metric, it does show the rising interest in the project.”