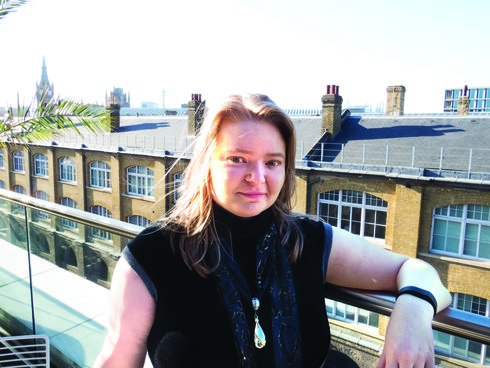 Hollie Kay built her first website in 1999, despite discouragement from teachers over her taking up “computers” as a lifelong career path. She didn’t pay attention.

While her schoolteachers dismissed her lack of following orders as “willful disobedience,” as she puts it, she was really using machines and websites as a way to cope with being deaf, which she was since infancy.

The 34-year-old London-based front-end developer is now working for Springer Nature with a large team of developers who maintain the publishing platform for scientific and academic journals. The platform publishes a large volume of research, which brings along many challenges for them. The company also focuses on disabled people having equal access to its website. Developers like Kay make sure they produce the “best UX that we can” so that no one is shut out from science or technology, she said.

(Related: Inside the effort to bring programming skills to autistic people)

Kay sees now that there are plenty of developers living with disabilities, and together they can collaborate to “overcome hurdles” and create websites that are accessible to everyone. When she was younger, her own struggles came from attending a school that wasn’t equipped to support a deaf student. She said as far as she knew, she was the only deaf person in the world.

“I had trouble describing the nature of my hearing loss to others, as nobody else had any comparable experience,” said Kay. “I muddled through for a long time, as most deaf people do, and I’m very lucky to have been surrounded by people who just accepted me as-is.”

Kay said it took a long time to find the words to explain the effects of her own hearing loss, calling it “complex and unintuitive.” She said that it’s hard for people to understand that a deaf person can be sensitive to noise, and that being able to hear a sound doesn’t mean it’s processed correctly.

Being deaf doesn’t change her ability to be a successful programmer. Both disabled and nondisabled programmers use their “brains to solve problems, and they both translate the product of that problem-solving into code,” according to Kay.

Kay has worked on many WordPress blogs and conducts user support when needed. She has also built a few Facebook apps for Gear4, Burger King and Logitech, and she did the mobile site for Universal Music. Additionally, she has built hybrid mobile apps in jQuery Mobile and Sencha Touch 2.

At Nature, she has the ability to give back to the development community with a “bundle” of open-source projects like Pa11y, the Node.js-based JSON-to-HTML translation tool Shunter, and Bandiera, a RESTful feature-flagging service with a Web interface for setting and configuring flags.

Kay is modest, summing up her successes to one sentence: “Variety is good.”

As a programmer, she is a believer of collaboration and social development, despite what stereotypes may suggest about coders or people in the software industry. Kay said that “Stereotypes by nature persist,” but developers have been known to kick back against being reduced to caricatures.

“The developers I’ve known are more often introverts than not, and anecdotally that holds for the industry as a whole,” she said. ”Society tends to favor the extroverted.”

Programmers are actually a social bunch, said Kay, and often engage in pair programming. “You get to remind yourself that everyone makes mistakes sometimes,” she said. “You have somebody to catch you before you deploy that bit of code you are definitely not supposed to be deploying.”

The problem with pair programming for Kay is the dynamics change because of her hearing impairment. Trying to think about her code, all while typing and looking at the screen while lipreading her partner at the same time is a “recipe for misery,” she said. Additionally, she has to understand their higher-frequency spoken English and “technical jargon,” which makes collaboration difficult.

The point of all of this is that with the power of the Web and technology, access by everyone is important, disabled or not, according to Kay. Hearing-impaired individuals can find success becoming programmers, given that the work is thought-based and solitary, and the output is written down, according to her blog.

“Disabled people are considered by developers to be a tiny minority,” said Kay. “We aren’t. Equal access is a right.”