Microsoft announced it has released the source code for the .NET Core Common Language Runtime (CLR) as an open-source GitHub repository.

The open-source repository includes the full CoreCLR, known as the execution engine for .NET Core. The CoreCLR implementation includes the RyuJIT compiler, .NET garbage collection, the .NET native interoperability feature, and other .NET runtime components. According to a blog post from the .NET team, in addition to the current open-source efforts, Microsoft is also working on cross-platform .NET implementations; .NET Core will ultimately switch from the Mono runtime to .NET CoreCLR for ASP.NET 5 applications.

“Today, .NET Core builds and runs on Windows,” the .NET team stated. “We will be adding Linux and Mac implementations of platform-specific components over the next few months. We already have some Linux-specific code in .NET Core, but we’re really just getting started on our ports. We wanted to open up the code first, so that we could all enjoy the cross-platform journey from the outset.”

In terms of developing ASP.NET 5 and .NET Core Console apps, the CoreCLR runtime executes code in tandem with the CoreFX libraries open-sourced this past November. The repository itself has approximately 2.6 million lines of code, broken down in the chart below: 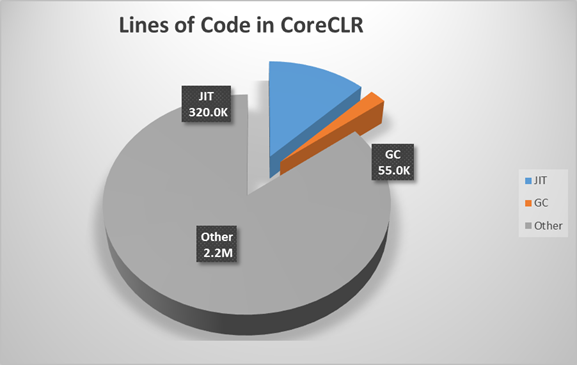 More information on open-source CoreCLR is available in the CoreCLR Developer Guide and in this Channel 9 video from the .NET Core Team.