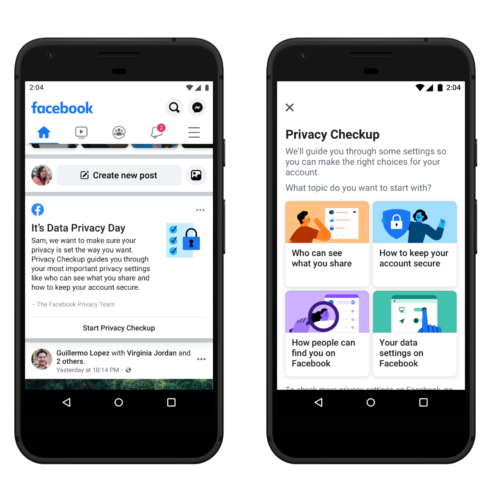 Facebook is attempting to be more transparent over the user data it possesses. Under intense public scrutiny this past year, the company has made a number of updates related to data privacy, including privacy checks, alerts for third-party logins, and the ability for users to have more control over off-Facebook activity.

According to Facebook, off-Facebook activity is the information that other businesses send to Facebook about user activity on those sites. This information is used by Facebook to show relevant ads; suggest groups, events, or Marketplace items; help users discover new businesses and brands; help businesses and organizations understand if their website or ads are reaching the right people and how they’re performing; and to identify suspicious activity.

In order to give users more control over that information, it has introduced a new Off-Facebook Activity tool to enable people to view that information and clear it from their accounts.

Users can access this tool by going to Settings > Your Facebook Information > Off-Facebook Activity > Manage Your Off-Facebook Activity. Information in the management console includes how Facebook received activity, the number of interactions received, activity from apps and websites users have logged into with Facebook, activity from data service providers and marketing agencies, and some activity not related to actions a user has taken.

According to Facebook, there is some information that won’t be shown in off-Facebook activity. They don’t always display the most recent activity. It also might receive more information than what is actually displayed. The company also said that sometimes it will disconnect off-Facebook activity from a user’s account for technical reasons, and those users will not be shown targeted ads from that activity.

The Electronic Frontier Foundation (EFF) believes that while this is a good step for Facebook to take, it is an incomplete measure. According to EFF, this is because most users probably won’t actually take action and look into these new privacy measures. For example, they claim that in the US, 75% of adults don’t know that Facebook’s ad preferences page exists.

“As long as the burden is on users to carefully manage multiple sets of labyrinthine privacy settings, the privacy-invasive norms of targeted advertising will remain. But Facebook and other companies whose business model relies on harvesting your data know that most users are uncomfortable with the status quo, and likely would not choose to have ads targeted at them if given a real option. That’s why we need a strong federal privacy law in the U.S. and stronger interpretation of existing privacy laws globally. Without it, we’ll just be shuffling deck chairs on the Titanic,” Gennie Gebhart, associate director of research at EFF, wrote in a post.

“From people who are passionate about gun rights to those who care about women’s reproductive issues, the right to participate in society anonymously is something that we cannot afford to lose,” Jay Edelson, a lawyer who worked for the firm that represented Facebook users, told the New York Times.

Facebook settled for $550 million, which will be paid to eligible Illinois users. A Facebook spokesperson said that the company decided to settle because they thought it was in their best interest to move past the issue, the New York Times explained.