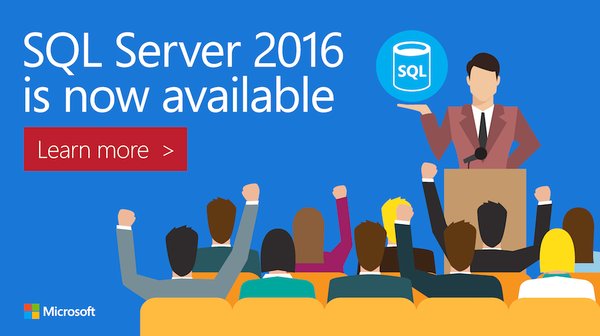 Microsoft wants developers to build intelligent applications on-premises and in the cloud with the ability to get real-time insights with its latest release. The company has announced SQL Server 2016 is generally available.

SQL Server 2016 is a new database for Hybrid Transactional and Analytical Processing (HTAP) that features in-memory column-stores, advanced analytics, and integration with the R programming language.

“Software applications can now deploy sophisticated analytics and machine learning models in the database resulting in 100x or more speedup in time to insight, compared to deployments of such models outside of the database,” wrote Joseph Sirosh, corporate vice president of Microsoft’s data group, in a post. “SQL Server 2016 simplifies analytics in the way databases simplified enterprise data management, by moving analytics close to where the data is managed instead of the other way around.”

SQL Server 2016 aims to bring a new a paradigm to building intelligent applications by allowing developers to update machine learning models, deploy new models, and monitor performance, all within the database instead of other solutions that make them move data out, according to Sirosh. “Eliminating the need to move data out of the database for analytics dramatically reduces the latency for insights,” he wrote.

“We provide world-leading data-warehousing capabilities, closely integrated with advanced analytics and machine learning through R,” Sirosh wrote. “We provide a world-leading business intelligence engine with Tabular and Multidimensional models. We deliver end-to-end mobile BI solutions on any device, and you can add on self-service Power BI for a fraction of the total cost.”

Going forward, developers can expect the release of SQL Server on Linux, which will help them build and deploy apps to more environments. Microsoft also plans to update the server’s current drivers in order to support more programming languages across multiple platforms.