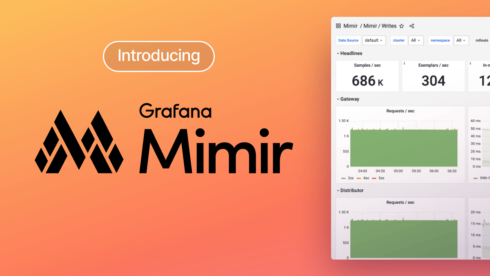 Grafana Mimir is a scalable open-source time series database that allows enterprises to scale to over 1 billion metrics, and features benefits like simplified deployment, high availability, and more.

The project is built on the foundations of Cortex, which was started in order to build scalable Prometheus-compatible solutions designed to be run as a SaaS offering.

Over time, Cortex became the basis for many other projects, including Grafana Loki, Grafana Tempo, and Grafana Enterprise Metrics.

“Mimir combines the best of what we built in Cortex with features we developed to run GEM and Grafana Cloud at massive scale, all under the AGPLv3 license. Included with Mimir are previously commercial features, including unlimited cardinality using a horizontally scalable, ‘split’ compactor and blazing fast, high cardinality queries through a sharded query engine,” Tom Wilkie, the vice president of technology at Grafana Labs wrote in a blog post.

For organizations currently running Cortex, Mimir can be a drop-in replacement within the constraints of a major version upgrade, taking less than 10 minutes to migrate from Cortex to Mimir for most setups.

Mimir can natively consume Prometheus metrics and soon Influx, Graphite, OpenTelemetry, and Datadog will follow according to Grafana.