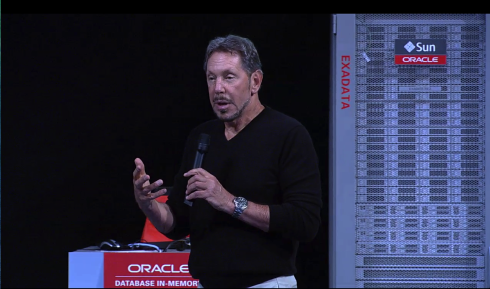 Oracle’s 12c in-memory database option will be generally available in July as an add-on to Oracle’s existing databases.

Oracle’s CEO Larry Ellison announced 12c availability in a webcast, explaining how Oracle’s delayed entry into the in-memory database game was a product of ensuring three goals: speeding up queries and analytics, increasing OLTP or transactional performance, and doing it without changing the existing application.

In-memory databases store information using RAM and chip storage rather than reading the data off of disks. The 12c option adds a columnar analytical format cached in RAM and drops analytical indexes to speed up queries, ramping up CPU core scanning to billions of rows per second, according to Ellison.

“In-memory databases were primarily designed to increase the speed of queries, to increase the speed of analytics and report writing, sometimes by two or three orders of magnitude,” Ellison said. “We did not want to compromise our transaction processing portion on the database. As long as we’re speeding up our queries, why don’t we speed up our OLTP at the same time?”

Oracle first talked up its in-memory option back at Oracle OpenWorld last September, pitching it as an entirely new product that would stand on its own in favor of comparisons to competing offerings such as SAP’s HANA platform and Microsoft’s in-memory SQL Server 2014 option. Since the OpenWorld announcement, Oracle has added what Ellison called a key feature: support for its RAC (Real Application Clusters) fault tolerance and scalability database.

The in-memory option is only available with the enterprise edition of Oracle’s database, and will also be supported in Oracle’s Exadata, Big Memory Machine and SuperCluster systems. Pricing information will not be released until launch.