JNBridgePro 8.0 focuses on cross-platform interoperability between Java and .NET frameworks 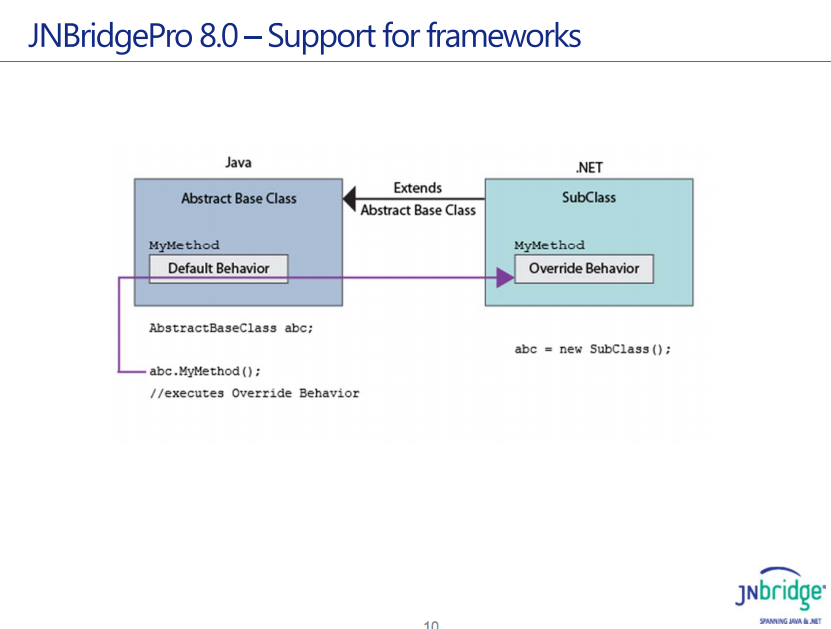 JNBridge is giving developers a new way to work with software frameworks in JNBridgePro 8.0. JNBridgePro is the company’s general-purpose Java and .NET interoperability tool.

The latest release enables cross-platform overrides for extending software frameworks. “What we have done is provide a way to very naturally override behaviors across platforms in a way that was not possible before except if you used complicated workarounds,” said Wayne Citrin, CTO of JNBridge.

According to him, this fills a huge gap and addresses a problem that developers have been facing. While developers can’t modify software framework code, they can extend it through additional code and overriding behaviors. However, if a developer wanted to previously write .NET code to extend a Java framework, there are limitations and involve time-consuming workarounds to change underlying code or add new components. With this release, JNBridge supports a natural way of doing developers, Citrin explained.

“This way you don’t have to use a workaround at all; you simply override the behavior in the same way you would do if you would just doing all your programming in Java or .NET,” he said.

In addition, the company made changes to JNBridgePro’s user interface providing a flatter and more modern look.

“We approached this latest version with the same simple philosophy we had when we started the company: to stay in lockstep with developers and deliver solutions that make Java-.NET interoperability a nonissue,” Citrin said. “JNBridgePro 8.0 again proves that interoperability can be achieved—easily, cost-effectively and with zero frustration on the part of developers.”