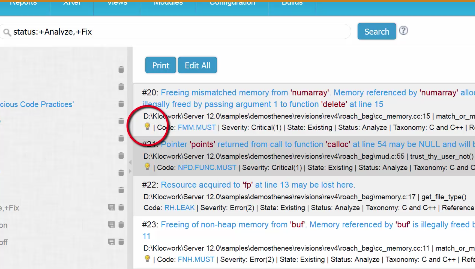 Rogue Wave wants to make it even easier to find vulnerabilities on the fly with the release of Klocwork 2017. Klockwork is the company’s static code-analysis tool. The latest release introduces SmartRank, a defect-recommendation engine.

“We knew our users were struggling with too many issues and no way to prioritize them,” said Walter Capitani, Klocwork product manager at Rogue Wave Software. “Our engineers created a function within Klocwork that enables users to not only see what issues are important, but to have them ranked from most to least important.”

According to Rogue Wave, developers are tasked with having to decide what defects and vulnerabilities to tackle first out of hundreds of thousands. SmartRank is designed to help developers prioritize and address their software issues faster. It uses smart algorithms to determine the more serious issues developers should look at first.

Other features include an upgraded analysis engine, C# 6.0 language features, improved Continuous Integration to support the Jenkins plug-in for macOS, and additional compiler support for Clang, GNU and Intel C++.