DOES: Culture can be a competitive advantage, or it can be an inhibitor 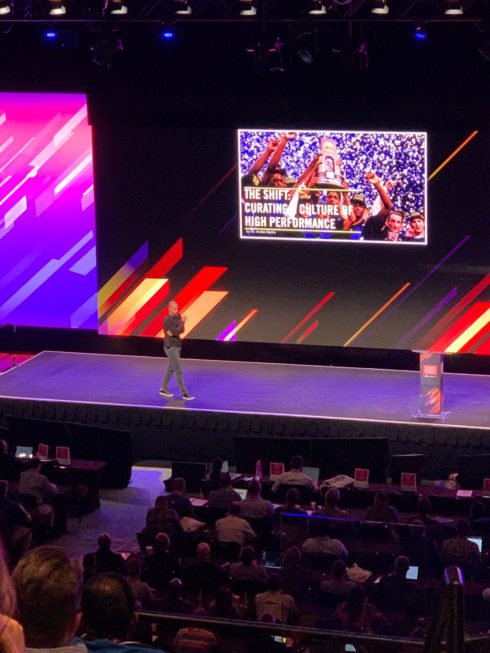 The DevOps community wants to get back to the human aspect of developing software. The DevOps Enterprise Summit is taking place in Las Vegas this week, and one of the dominating themes has been people, not process or technology.

Andre Martin, vice president of PeopleDev at Google, spoke about how businesses can create “a culture of high performance” that doesn’t hold them back.

“How do you make sure that a company is as powerful as a brand?” said Martin. “And how do you ensure culture is a lever of growth and not the reason why your company doesn’t exist?”

Martin spoke about some of the top companies 20 years ago: Atari, ACE, Taxi, TiVo and Jones University. Fast forward to today, and these companies have disappeared despite being on top and having all the technology they needed to remain there, he explained.

“The reason they lost their way is because they lost the culture,” Martin explained. “They lost sight of the original principles they started their firms with … and started to treat themselves as invincible … as if no competitor could compete with them.”

“Past experience is going to be the inhibitor to future growth,” Martin added. “We use our experiences to define the moment we are sitting in and in doing so we are likely missing a lot.”

However, companies do seem to understand culture is important; they just are not tackling it, Martin explained. He cited a McKinsey and Company report that found 68% of respondents believe culture is a competitive advantage, 81% believe organizations without high-performing cultures are doomed, 76% believe they can change their culture, and 67% believe they need to change.

To get a sense of how an organization’s teams are working, Martin said to look at “the bids.” In a couples relationship study, researchers found couples bid towards, away and against. Bid towards is demonstrated through compliments, engagement and retention. Bid against is arguing, and bid away is ignoring.

“The takeaway is pay attention to the bids,” said Martin. “Teams are bidding for your attention every day. What kind of bid are you giving them?”

Martin also added it’s not only important to look at your team’s culture, but also be aware of the team’s climate. Culture is the expectations that are set while climate is the environment, the felt experience of team members. Getting both aligned will result in high engagement and committed employees, said Martin.

For instance, you can’t claim to be a company all about values and collaboration and then have your teams in a dark basement and you are just barking orders at them, he explained.

In order to change culture, leaders have to be mindful of their team’s climate; as an employee or talent, they have to have a voice and speak up in order to make the company a successful brand; and as a community, we have to talk to each other and understand how to balance the work, and be open to learn and do things differently, according to Martin.

“If you find someone with creativity, innovation and talent — don’t let them go,” said Martin.