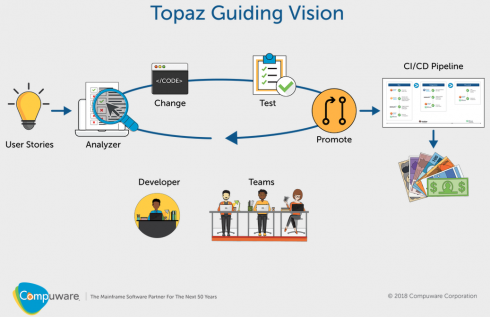 Compuware today announced enhancements to its Topaz mainframe DevOps solution that continues the company’s work to get new developers who lack familiarity with the mainframe up to speed more quickly.

“When new developers come in, they’re able to go in and use Eclipse. The challenge is how to put things together to edit, cache, compile and execute code,” Rizzo said. “Topaz has the Eclipse project concept, so it’s not a foreign term” to new developers. “Now it’s just about learning the syntax of code.”

Rizzo added that Compuware has created a Jenkins plugin to work with the mainframe’s Job Control Language. This will allow DevOps teams to bring mainframe processes into their integration and delivery pipeline through Compuware’s proprietary connection, which Rizzo said is more secure and faster than the standard TCP/IP FTP connections.

Finally, Rizzo noted that Compuware updated Topaz for Total Test with CICS support. The new solution gives developers and testers the ability to use stubbing technology to work in CICS without having to do a CICS startup and setup, he explained. “This provides the unit testing functionality they’re been looking for,” he said. “They can do it on other platforms and want to do testing the way they’re familiar with.”

In a statement announcing the release, Compuware CEO Chris O’Malley said, “Topaz gives these development artisans the familiar, intuitive, automated and richly functional environment they need — and prefer — to fulfill this critical mission and continuously improve in the measures of velocity, quality and efficiency.”

Rizzo said sales and MIPS are growing for Compuware within the company’s existing customers, proving the mainframe remains relevant for those with investments in the technology. “They’re using more computing resources on the mainframe.”