Code Watch: Learning to be a multi-rotor hobbyist 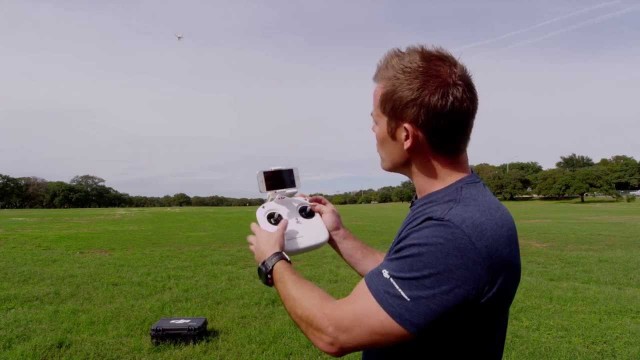 I fly a DJI Phantom, the most popular consumer multi-rotor. With stock batteries and my GoPro and video transmitter in place, I get a low-voltage reading at around nine minutes. Rapidly, the multi-rotor’s on-board software becomes less-responsive to vertical commands until, about a minute later, it executes a soft landing. This is commendable: It helps prevent the multi-rotor from falling out of the air, which is much more likely to cause injury and property damage. But I often fly over the ocean and have a clutch of batteries, each with its own slightly different discharge profile, and face splash anxiety every time I spin up the engines.

The LiPo batteries that are broadly used in the RC field have quite flat discharge curves: They rapidly drop from their peak voltage, deliver their rated voltage for the majority of their capacity, and then fall off very rapidly. (At least that’s how it seemed to me.) I suspect that with better data I could produce a better prediction of flight time. At the very least I could program audible feedback at various thresholds.

The third thing you learn about the multi-rotor hobby is that its technology stack is derived from the long-extant RC hobby, not the mainstream stack of Internet technologies. Specifically, RC generally uses the band near 2.4Ghz for control and the band near 5.8Ghz for transmitting video. Those frequencies will sound familiar to WiFi users, which is actually a major problem, because traditional RC does not use WiFi for either control or video. The RC boards are rife with stories of people using on-board WiFi from their GoPro cameras only to discover that, at longer ranges, the WiFi signal overwhelms the control and GPS signals. I don’t like stories that involve the words “fly away.”

WiFi has one advantage, which is that we all carry around smartphones and tablets. It has an enormous range disadvantage. While there’s an influx of lower-end consumer multi-rotors based on WiFi, as far as I can tell there’s not a viable WiFi-based UAV stack.

Everyone wants a video feed (because of this), and obviously the on-board systems have other valuable data, such as the vehicle’s current location and orientation and battery consumption. Such telemetry may be piggybacked on the control frequency, but it is more generally composited into the video feed. Analog video transmitters are cheap, light and have no encoding lag. On the other hand, who needs another screen in their life (especially a screen with considerably worse-than-smartphone daylight visibility and resolution)? Even worse, there’s no easy way to break out the telemetry for custom processing. FOSS projects such as OpenPilot and Dronecode are focused on the on-board stabilization and flight-control software and on flight planning.

For telemetry, the MAVLink protocol is certainly the way to go, but I could not find anything that resembled a plug-and-play solution for the DJI platform.

But the multi-rotor hobby is a maker’s dream: It’s actually something for your 3D printer and/or laser cutter to do (especially if you get into FPV racing). And you can probably get away with through-hole soldering, but surface-mount can save you precious grams!

Unfortunately, as with many maker/tinkerer hobbies, it turns out that the one-time component cost for a solution is often—perhaps even generally—greater than the cost of the problem at hand. For what I wanted (a digital telemetry transmitter and receiver, and a ground station that could interface with a tablet via Bluetooth), I estimated the cost as exceeding the price of a replacement multi-rotor.

The UAV field is changing extraordinarily rapidly, and although I cannot pretend that losing my existing setup is something I look forward to, the fourth thing you learn about multi-rotor flying is that until you have a good crash story, you’re still a beginner.