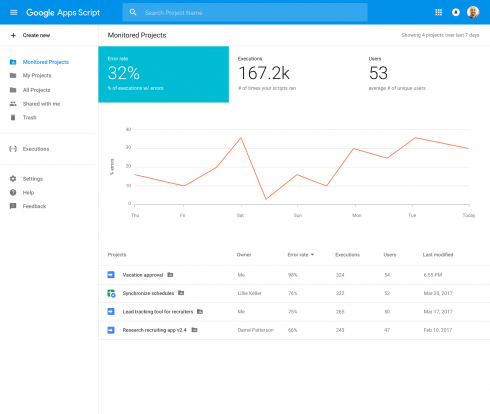 The new tools — Apps Script dashboard, API and Command Line Interface — come as part of a new push to improve G Suite app development, according to the G Suite team.

“As developers increasingly rely on Apps Script for mission-critical enterprise applications, we’ve redoubled our efforts to improve its power, reliability and operational monitoring, like our recently announced integration with Stackdriver for logging and error reporting,” the team wrote in a blog post.

The first utility, the Apps Script dashboard will be rolled out over the next few weeks, providing a single place for developers to “manage, debug and monitor” all of their Apps Script projects.

The dashboard is built on top of the new Apps Script API, which the team explained it “replaces and extends” the Execution API. It’s a RESTful interface, allowing users to create, manage, deploy and execute their scripts from their preferred programming language.

Finally, being released open-source, is the “clasp” command-line interface tool, which “allows you to access the management functionality of the Apps Script API with intuitive terminal commands.” It’s available from the project’s GitHub.

“We’re doubling down on powerful platforms like Apps Script. We hope these new additions help ease your development process,” the team wrote.