You’re walking down the hallway of a creepy fantasy mansion. You enter an abandoned kitchen, and your view begins to waver and pulse as you become nervous. As your tension grows, the room begins to flood with milk.

While this sounds like a strange new game (and it does have some game derivatives), it’s actually part of an Intel development project to expand the use of 3D sensing cameras.

The milk-spewing kitchen is a scene from a game called Nevermind. It was demonstrated at this year’s Game Developers Conference, and one of the core aspects of its design is that it monitors your heart rate through the use of a high-resolution RealSense camera that detects a user’s pulse by watching his or her eyeball.

Nevermind plays like a normal video game, but when the player’s pulse quickens, the screen becomes blurry, more frightening and more difficult to navigate. While video games can be challenging for people who don’t spend all their time playing them, Nevermind is even more difficult because it requires the player to calm down to move ahead with the story—no small feat when playing a game that delights in telling a rather twisted story of murder and psychological torture. 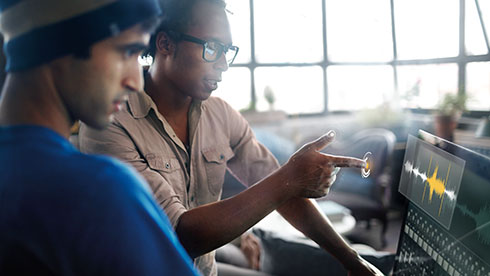 This is just one of the uses for the RealSense camera, however. The device was inspired by the Microsoft Kinect, and it uses similar infrared beam-based detection for depth perception.

Dave Wiltz, product marketing manager for RealSense at Intel, said of the gesture-detecting camera, “It’s a change with how people are interacting with desktop and with the mobile systems as well. We’re staring to see a tipping point where people are getting used to this kind of interactivity.”

Of course, this is not the first time a company has tried to push video camera technology into the marketplace. What’s different this time is that Intel is specifically keeping the development kits simple and consolidated.

“We’re providing one interface; there are no different interfaces,” said Wiltz. “We’re looking for an SDK that is able to allow the developers to write once and to have that work for whatever class of applications they’re trying to do. They don’t have to learn a new language or input. As you see, new cameras come along or technologies come out, and the developers will find the SDK is something they can pick up once and use across their applications.”

Wiltz said that developers are finding new ways for their users to interact with their applications, thanks to the RealSense. He added that the R200 series of cameras, which are slated to arrive this summer or later, are already seeing interest from hardware manufacturers. Intel hopes to get this device into laptops, for example.

RealSense is currently available to developers, and includes a camera and the Intel SDK.