The Top 20 countries for software piracy

The pervasiveness of online privacy is an acknowledged reality of today’s Internet.

Software licensing, security and usage tracking provider V.i. Labs has analyzed customer data to identify where in the world most software piracy and license misuse originates from. While illegally downloaded movies and music may be the focus of government and financial efforts against piracy, unlicensed software piracy and license misuse run rampant as well, and its prevalence shifts from country to country.

According to the V.i Labs report, which analyzed customer data from its CodeArmor Intelligence software usage-tracking platform, the countries with the highest number of machines running unlicensed software this year were China, Russia and the United States, respectively.

Compared with the V.i. Labs data from 2013, China and the U.S. maintained the No. 1 and No. 3 spots, with Russia moving up four spots from last year to take No. 2, and Ukraine moving up a significant 15 spots, landing at No. 4 on the 2014 software piracy list. Taiwan, last year’s No. 2 most pirated software country, moved to No. 5.

V.i. Labs noted, though, that according to the BSA 2013 Global Software Survey, the actual commercial value of unlicensed software in the U.S. dwarfs that of China and Russia. 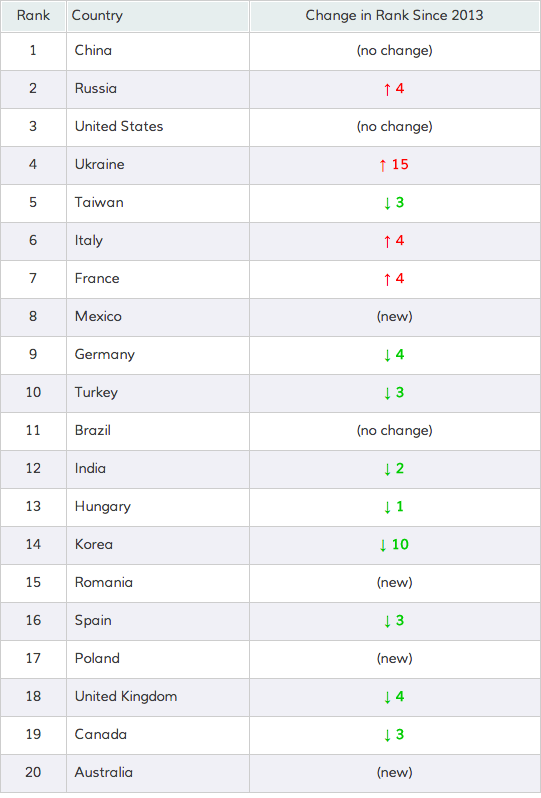 The report showed that the highest instances of software piracy come not from underdeveloped nations, but from highly populated countries with thriving technology sectors. Though another factor could be that these countries simply have more desktop and mobile devices in use with which to run pirated and unlicensed software.

The V.i. Labs report noted that its findings are derived from unique machines running unlicensed software ranging from desktop business-to-consumer software to higher-value business-to-business software in the engineering, CAD/CAM, and EDA markets. Thus, the company stated the data is biased toward larger CAD, PLM and EDA installed-base deployments.

“When we talk about “customer data,” we’re talking about our customers, who are software vendors,” V.i. Labs marketing director Michael Goff told SD Times. “We aggregate their top level data–unique machines that are detected to be using unlicensed software-and then use it to generate the Top 20 list and heat map. Each of our customers has language in its licenses that covers the collection of data like this, and there is no collection of any personal information.”